Angling Notes: Joe Creane intends sending one of the boats to his son in New Zealand 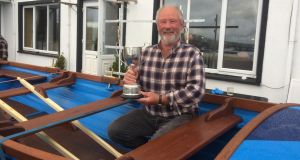 The name Crean is synonymous with achieving success in Antarctica exploration. Add an ‘e’ and the same winning aptitude applies to Joe Creane from Roundstone in Co Galway following his achievements in winning this year’s European Cup and McConville Cup competitions on Lough Mask.

Up against strong opposition from almost 200 fellow anglers across the two events, Creane reached the pinnacle with flying colours. His heroic efforts on each account netted a top-of-the-range new lake boat – an Anglers’ Fancy and Lough Sheelin 19ft boat, respectively.

“I intend to send one of the boats to my son in New Zealand, where he gillies as an angling guide,” he said.

This was the third year for the Bilberry/Lannagh angling club to host the event on Lough Mask. Previously, the club utilised its home put-and-take fishery. However, for stocking reasons it was decided to make the switch.

From the fishing perspective, the day was a great success with 82 anglers returning 23 quality trout for weigh-in. (Each angler was allowed to catch two fish and submit just one over 14in.)

While most opted for the Inisgleastai and Inishocht islands and canal, the winner headed for inner Maamtrasna bay. “I caught my 4lb 6oz fish at a small stream outlet on a claret dabbler. It almost devoured the fly,” a delighted Creane said.

A reader from Westport who is researching the oldest habitations in the Ballycroy area in Co Mayo is anxious to pinpoint “the Farm at Glenduff” that was built between 1835 and 1851.

The farmhouse was described in a book entitled The Saxon in Ireland or Rambles of an Englishman in search of a Settlement in the West of Ireland by John Harvey Ashworth (1851).

The reader, John, asks if any history of the fishing lodges in the greater Ballycroy/Erris/Nephinbeg area has ever been written, for example, Sheean Lodge, the Blue Lodge, Rock House, etc.

Any assistance with this research would be greatly appreciated. Please contact angling@irishtimes.com and I will supply John’s contact details.

The Minister for Business, Enterprise and Innovation, Heather Humphreys, will officially launch a new angling facility today at Lough Muckno, now upgraded to improve access to cater for a larger number of anglers.

It is hoped the new amenity will attract international competitions and visiting anglers, in addition to an enhanced local recreational amenity. The project was supported by Inland Fisheries Ireland through its national strategy for angling development.

Inland Fisheries Ireland secured a conviction against a riparian landowner on the Munster Blackwater for removing spawning gravels during last summer’s drought. Judge John King imposed a fine of €500 and awarded costs of €3,388 to IFI at a special sitting of Mallow District Court under section 173 1(d) of the Fisheries (Consolidation) Act 1959, for disturbing spawning beds at Gortmore, west of Mallow on the upper Blackwater.

Following a report from Waterways Ireland, a significant fish kill occurred recently on the Royal Canal in Kilcock, Co Kildare. An investigation by IFI identified agricultural discharge to a river Ryewater feeder that enters the canal at Kilcock.

About 300 fish were killed with several species affected including roach, rudd, bream and pike.

Farmers are again reminded to remain vigilant to avoid water pollution during the summer months when harvesting silage and spreading slurry. Silage effluent is a significant pollutant and if allowed to enter a watercourse can potentially lead to fish death and habitat degradation.