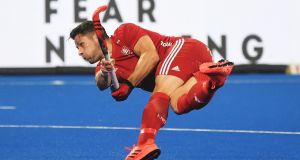 Former Irish international Mark Gleghorne denied the Green Machine an opening day victory as he scored for England in a 3-3 draw at the Four Nations in Terrassa with just 25 seconds to go.

Ireland led for over 50 minutes of the tie only to be denied the result in the dying seconds. Ben Walker netted his third goal in three successive games to give Ireland an early advantage and Shane O’Donoghue doubled the advantage two minutes into the second quarter from a penalty corner.

Will Calnan pulled one back before half-time and England drew level via Sam Ward’s set piece goal in the closing quarter.

Parity lasted just a minute, however, as Daragh Walsh restored the Irish lead with eight minutes to go, making it 3-2.

England, though, withdrew their goalkeeper with three minutes as they threw everything into attack to try and a nick a draw.

And it paid dividends as they camped in the Irish 22 - with O’Donoghue in the sin-bin - for the final phases before Gleghorne scrambled in the equaliser.

Next in the competition, Ireland face world number 12 side Malaysia before completing the tournament on Sunday against hosts Spain (11am). It is part of the build-up to the European Championships which start on August 16th.