Martin and Roche back in action in San Sebastian 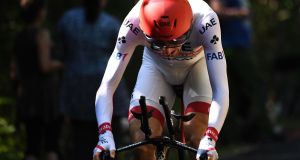 Ireland’s Daniel Martin: he may want to prove a point after a Tour de France that didn’t live up to his expectations. Photograph: Getty Images

Following their solid performances in the Tour de France, Dan Martin (UAE Team Emirates) and Nicolas Roche (Team Sunweb) will both line out in the Clasica San Sebastian on Saturday. Martin finished 18th overall in the Tour, while Roche was aggressive on many stages in the race and had a best finish of sixth on Stage Nine.

Both have ridden strongly in the Clasica San Sebastian in the past: Roche was fifth in 2013, and has also placed eighth and twice tenth. Martin was seventh in 2015, and has been twelfth on two other occasions.

Both will hope for strong performances, with Martin likely looking to prove a point after a Tour that didn’t live up to his expectations. Speaking to the Irish Times during the race, he said that he believed there was a nutritional issue that his team needed to identify. He declined to elaborate further.

Since then media reports have put the blame on an energy drink supplied by a team sponsor, saying that this was causing problems for the riders.

Tour de France winner Egan Bernal (Team Ineos), long-time yellow jersey Julian Alaphilippe (Deceuninck-QuickStep) plus many other strong riders from the race will line out in Saturday’s event. Although riders are fatigued after the Tour, it is often possible to retain a short-term level of good form immediately after the race.

Also set to compete on Saturday is Eddie Dunbar. The 22-year-old continued his strong season in recent days, with the Corkman performing strongly in the Tour de Wallonie. He placed tenth on Sunday’s Stage Two and rode consistently throughout the five-day event. He ended up sixth overall in the general classification, just 19 seconds behind the overall winner Loïc Vliegen (Wanty-Gobert Cycling), and was second in the best young rider competition. He was also ninth in the king of the mountains competition.

Landing a win is a big priority for him this season. Although he may well find himself racing for Bernal on Saturday, Dunbar will continue building form and experience, and should have a superb second half to his season.

In other news, Irish riders got off to a strong start in the Tour de Belle Isle en Terre/Kreiz Breizh Elites women’s race in France on Thursday.

The 2.2-ranked race concludes on Friday with a 119km race from Belle-Isle-en-Terre to Ploumagoar.

Finally, Thursday marked the official start of the UCI’s transfer season, after which team changes for the 2020 season can be made public. Sam Bennett is expected to move on from the Bora-hansgrohe team and has been linked to the Deceuninck QuickStep squad.

Others reaching the end of their current contracts include Roche (Team Sunweb), Ryan Mullen (Trek-Segafredo), Dunbar (Team Ineos) and Conor Dunne (Israel Cycling Academy). Some or all of those may well extend with their current squads.