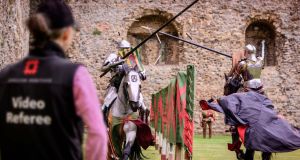 Jousting is set to be the latest sport to use a VAR technology. Photograph: Jim Holden/English Heritage/PA Wire

Video Assistant Referee (VAR) technology is to be trialled in one of the world’s oldest equestrian sports as jousting becomes subject to the same scrutiny as football and tennis.

The system will track and use video replay to accurately score the competitors’ moves in the fast-paced medieval sport during a series of jousts across England in August.

Jousters at Pendennis Castle in Cornwall will see the charity English Heritage collaborate with VAR specialist Hawk-Eye to trial the technology for the first time on Wednesday.

The VAR system is regularly used in football, tennis and cricket, among other sports, to enable officials to reach more accurate decisions.

The charity said accuracy was vital in “England’s first national sport” – which sees participants wearing chain mail and charging at each other on horseback – as each hit with the lance to different parts of the shield or helmet is worth different points.

Emily Sewell, English Heritage’s head of events, said that one of the misconceptions around jousting was that the “intense clashes” were choreographed.

“It takes a great deal of precision and skill to aim the 12ft lance at a moving target and make the hit with the most points and it really matters to the knights – their honour is everything,” she said.

“But it also currently requires our Knight Marshall to accurately observe the location of each hit every time, which is quite a challenge.”

A campaign was launched by the charity in 2016 for jousting to be recognised as an Olympic sport, receiving thousands of signatures on a petition calling for it to be introduced at a future Olympic Games.