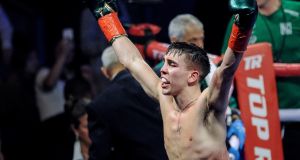 Saturday night’s venue in the Falls Park is just a short walk from where a giant mural of Michael Conlan looks over his home patch of terraced Cavendish Street. It is where the 27-year-old played when he was a child and where more than 10,000 will attend on Saturday despite the disappointment of original opponent Vladimir Nikitin pulling out with a torn bicep.

A repeat of Conlan’s historic defeat to the Russian in Rio, where his bullish condemnation of a governing body widely seen to be corrupt and dysfunctional was epic, will have to wait.

For now opponent Diego Alberto Ruiz, who has “come here to win this fight” will be the principal object of derision at Féile an Phobai, where he will face probably the most hostile crowd of his career. Conlan has never been anything other than part of West Belfast DNA and tomorrow is night seen as further solidifying that connection. In Conlan’s words it is “a coming out party for me.”

On offer to the 25-year-old Argentinean with a record of 21 wins and two defeats are the vacant WBO and WBA Inter-Continental featherweight titles. Ruiz is more experienced in the professional ranks than Conlan with his 11 wins in as many outings. But the Irishman’s amateur record as an Olympic bronze medallist and amateur World Champion eclipses his opponent.

Coming off a St Patrick’s Day win in New York, this is Conlan’s second fight in Belfast, having beaten Adeilson dos Santos in the SSE Arena in 2018 and with talk from his coach, Adam Booth, of a possible world title fight next year its one he must win.

“I’ve had a target on my back since the amateur days. Even when I came into the professional ranks there were expectations on my shoulders. I know how to deal with the pressure,” said Conlan this week. “This is obviously different and something bigger than I could have ever imagined. When I get into the ring it’s all business. I believe it’s the best Michael Conlan you’ll see.”

Boxing Rec have the orthodox Ruiz aka ‘The Prophet’ rated higher at 55 to Conlan’s 67 in their featherweight ranking. He has won his last 10 fights, five of those by stoppage, his most recent for the vacant WBO Latino Silver Featherweight belt last month, beating compatriot Luis Emanuel Cusolito.

But slick Conlan is favourite and although still on a professional learning curve his speed and grooming under Booth has made him a talked about prospect. Ruiz has come to win. But maybe the Falls Park is not the place.

* Coverage begins at 8pm on Saturday night. Conlan is expected to feature around 11pm. The event comes from the Marquee at Falls Park in Belfast and will be broadcast on BT Sport 1.

5 Ireland v France in doubt due to hotel quarantine policy