‘It’s been a long process for two years now. I think we needed 101 things to go our way today’ 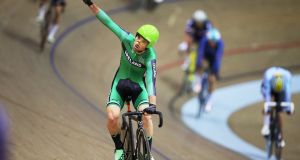 Irish duo Mark Downey and Felix English have swooped at the track world championships in Berlin, provisionally securing Olympic qualification for the country after overtaking their two pre-race rivals in the points standings.

The duo rode strongly in the 200 lap event, biding their time as their main rivals for the Olympic place, Japan and Portugal, both clocked up points. The Japanese took third place in the second of 20 sprints, netting two points, but subsequently lost a lap and conceded 20 points. They then withdrew from the race.

The Portuguese riders finished second in the same sprint, thus moving three points clear of Ireland. However they too conceded a lap and lost 20 points; in contrast, Downey and English maintained their positions and then scored three points by taking second in sprint 18 out of 20.

This saw the Irish duo finish 11th behind the Danish winners. Portugal ended the race 14th.

Downey and English had gone to Berlin needing to fight hard for qualification. Having secured a place for Ireland in the Tokyo Games, they were elated.

“I’m absolutely over the moon,” said Downey. “It’s been a long process for two years now. I think we needed 101 things to go our way today. We woke up this morning and the two of us were so nervous because we knew we just couldn’t make one mistake. We’ve had our backs up against the wall now for nearly a year and a half and we’ve done it in the last [RACE]so that’s pretty special.”

English said they knew exactly what they had to do heading into the race, and managed to achieve that. “It was just mad,” he said. “We knew everyone, especially those top five teams were just going to be untouchable essentially. And then we had two teams we needed to look at which was Hong Kong and Portugal. We needed to put five spots into Hong Kong, and we needed to just beat Portugal in the race.”

The duo’s performance has also provisionally secured a place in the Omnium event in Tokyo.

Sharpe was part of the women’s team pursuit squad which shattered their own Irish record on Wednesday en route to securing eighth place in the competition. Other Irish squad members Lydia Boylan and Lydia Gurley placed 11th in the women’s Madison on Saturday, provisionally securing an Olympic spot for Ireland in both that event and in the women’s Omnium.