Irish gymnast: ’Thinking about being the Olympic champion, that spurs me' 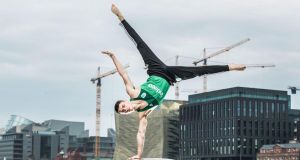 Rhys McClenaghan walks in about five seconds ahead of me and takes a seat in the empty café area at the Sport Ireland Indoor Arena. He glances at his watch and then sees me coming. The outstretched hand is small but firm and already an honour to shake.

It’s Monday lunchtime and there are no minders, only one of Ireland’s leading Olympic gold medal prospects come Tokyo this summer. He’s still just 20 and that’s a lot of pressure on any young shoulders, no matter how cut or muscled, and McClenaghan is well able to tell me that all by himself.

We’ve talked before, only not one-on-one, and if some things about his journey to Tokyo seem fast-tracked there is no denying he is comfortably primed now for the destination. Only 150 days to go! Even dressed up in a thick grey hoodie there is no disguising his pure athleticism, the set of keys he puts down in front of him hanging off a lanyard printed with the Tokyo 2020 logo. Not by coincidence, presumably?

“Not at all. I was in Japan in January and brought back some souvenirs. I want the reminder every day, that first I’m going to the Olympics, but also that I need to keep working on it. I’ve said it already, for me it’s not about going to the competitions to take part anymore, I want to take home medals, and I’ve done that so far. Thinking about medals is what motivates me. Thinking about being the Olympic champion, that spurs me, you can do incredible things when you think that way.”

This comes after some brief small talk, because without once mistaking his confidence for aloofness, or his self belief for false modesty, McClenaghan cuts straight to a level of sporting maturity that definitely defies so much, just as his accomplishments have too.

At such a young age, to be able to turn my lifetime passion into my job. That’s an incredible thing

In 2016, a first ever gymnastics medal for Ireland at the European Junior Championships; gold at the 2018 Commonwealth Games and European Senior Championships; then bronze at last year’s World Championships. The pommel horse is his speciality, and to gently test that confidence further I show him the Gracenote Virtual Medal Table for Tokyo, which predicts podium places based on all competitions since Rio 2016, and there he is sitting in the bronze position, behind Britain’s 2016 champion Max Whitlock and Lee Chih Kai of Chinese Taipei.

“Well, that’s with my old routine,” he says without blinking. “Because even since 2019 I’ve upgraded a lot to a new routine. If I’m honest it’s not daunting. For me, it’s exciting, a challenge, because I want to be in that top spot. I want that gold medal. That’s the drive inside me.

“And I mainly take my confidence, that bit of ego maybe, from the training, in the gym. I am by myself a lot, so I do have a lot of time to think. But once I get to the competition I don’t think about the medals. There is only me, doing my job. Plus I love the sport, love gymnastics, the feeling swinging around, flying through the air, effortlessly. And at such a young age, to be able to turn my lifetime passion into my job. That’s an incredible thing.”

He’s just driven down from his home outside of Belfast, his home during the week being the house owned by Gymnastics Ireland close to the Sport Ireland Campus, which he shares with his coach Luke Carson and the small rotating group of elite Irish gymnasts. With podium funding of €40,000, McClenaghan is now in an elite group of his own but this hasn’t come without some setbacks.

He’s also an ambassador for Team Ireland partner and Global Job site, Indeed, who have produced a short film tracing his journey and focusing on the shoulder injury which cut short his 2018 season. At age 11, he was capable of the triple Russian, on one handle, the hardest value skill on the pommel horse, so he knew perfectly well himself when something wasn’t right.

I’m the cleanest pommel horse worker in the world, but the difficulty needs to be cranked up a little bit, while maintaining the execution

He slowly describes it in detail: “There was a pain in my left shoulder, to a point where I literally couldn’t lift up my left arm. I competed at the World Championships anyway, but wasn’t able to perform, and after that decided on surgery to repair the labrum, which is like the joint cushion, in the shoulder. Such a horrible time, I hate even thinking back on it, the whole month of December I was at home, my left arm in a sling, and that was challenging. I hadn’t had that much time off since I was eight, and it felt like a chemical imbalance in my brain.

“So in 2019 I was starting from scratch. But it gave me that chance to reinvent my basics, make my gymnastics even better, and that’s exactly what we did. When I got back competing, people were saying I was like a completely different gymnast. I was reinventing the technique, after 10 years, making it more non-deductable, where the judges could take points off. It was a blessing in disguise, and it couldn’t have worked out better.

“I’m the cleanest pommel horse worker in the world, but the difficulty needs to be cranked up a little bit, while maintaining the execution. That raises the risk, as well, but it’s worked before. So I think Tokyo will fall at the perfect time. I can’t wait to showcase my new routine.”

Not long after that he glances at his watch again. “Right, I’ve got to go training.”