Coscoran signs off on indoor season with championship record 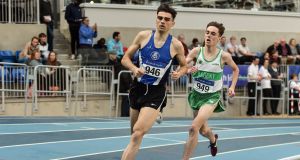 Andrew Coscoran of Star of the Sea AC, Co Meath, on his way to winning the Senior Men’s 1500m event, ahead of Brian Fay of Raheny Shamrock AC, Dublin. Photograph: Sam Barnes/Sportsfile

The journey continues – only for now Andrew Coscoran has signed off on his indoor season with the perfect exclamation mark: new championship record!

Coscoran has unquestionably been the breakthrough performer of this season, and suitably proved that by winning his first national title over 1,500 at the Irish Indoor Championships, the 23 year old from north Dublin clocking 3:41.36 after putting the boot down with that two laps remaining.

Though representing his club Star of the Sea, Coscoran is also part of the new breakthrough training group the Dublin Track Club (DTC), which has the specific aim of improving Irish distance running standards: indeed Coscoran gunned down another DTC member over those last two laps as he passed Brian Fay, the 21 year old from Raheny taking second in 3:43.13, with defending champion Eoin Pierce from Clonliffe third in 3:45.35.

Behind them came two runners of considerably different ages, though no less impressive: Cian McPhillips, the rising 17 year old from Longford AC, took fourth in 3:49.63, while 51 year-old Shane Healy, the 1996 Olympian over 1,500, finished eighth in 4:01.76, improving his over-50 age-group world record.

“To turn up, break a championship record, first national title, nothing to complain about,” said Coscoran, after receiving his medal from former world indoor record holder Eamonn Coghlan. “There has been a drop-off in Irish distance running, but we’re trying to get back, do what they were doing.”

More importantly for Coscoran, and also Phil Healy, Mark English and Ciara Neville with their winning performances, the national title will contribute handsomely towards their Tokyo Olympic qualifying ranking – even if the Games felt a long way from the Sport Ireland Indoor Arena, and in more ways than one.

The 2020 World Indoor Championships were originally set for Nanjing in China later this month, only to be postponed to 2021 due to the coronavirus; that brings the curtain on the indoor season a little premature, and also creates a little more uncertainty about how the qualification process will unfold in the months ahead. That may well be the least of Tokyo’s worries.

In the meantime Healy, English and Neville will also be perfectly content with the here and now. After winning the 200m title on Saturday, also running a championship record of 23.16 seconds, Healy lined up again in the 60m final, taking third place behind Neville and older sister Joan Healy, and is now well positioned to make Tokyo in the 200m.

Neville equalled her own best and under-23 record when winning in 7.30, Healy edging out her younger sister 7.33 to 7.36, with defending champion Molly Scott fourth in 7.42: “To run just shy of the national record again is absolutely super,” Healy said of her 200m win, followed home by Tallaght’s Rhasidat Adeleke, the 17 year old clocking 24.08. “Anyone can win the 60m and everyone is beating each other throughout the season so I was glad to put myself into that mix.”

Concerns over the indoor form of English were also signed off with an exclamation mark: Irish indoor title number seven! Indeed the Donegal doctor looked as smooth as ever, cruising past Zak Curran inside the last 100m to take the win in 1:49.09, a title he first won in 2011, Curran holding on for second in 1:51.19. With six consecutive outdoor 800m titles already to his name, that’s national title number 13, at age 26, and English appears primed to continue that journey to a possible second Olympics.

Nadia Power was the class act in winning the women’s 800m in 2:06.26, with Louise Shanahan from Leevale following in the footsteps of her father Ray when winning the 1,500m. A high-quality men’s 3,000m ended with John Travers from Donor Harriers taking title number four, to go with two over 1,500m, after he bolted clear of Hiko Tonosa over the final two laps, winning in 8:00.96, with Darragh McElhinney, just out of the junior ranks, taking third in 8:06.18.

There was a highly emotional end to the men’s 60 final when Dean Adams from Ballymena and Antrim AC took his first win in 6.74 seconds, and with that winning the inaugural Craig Lynch trophy, named after the 2016 champion who died in a tragic accident this summer, aged just 29.

Among the field event highlights was World U-20 silver medallist Sommer Lecky of Finn Valley sharing the women’s high jump title with Philippa Rogan of Sli Cualann, while Michaela Walsh of Swinford was once the best of anyone in the women’s shot. Keith Marks from Clonliffe won the long jump with a best of 7.33, Sarah Buggy from St Abbans A.C. winning a triple and long-jump double.

Dundalk boost European hopes with vital win in Derry 20:18
Princess Zoe primed for tilt at Prix-Royal Oak at Longchamp 20:04
Pope keeps West Brom out in first scoreless draw of the season 19:56
Ghaiyyath retired to stand as a stallion at Kildangan Stud 17:28
Masks, loads of parking and no people: Covering GAA in a pandemic 17:24
Here is your handy guide to sport on television this week