Equestrian: Ireland take second for third year in a row at Nations Cup 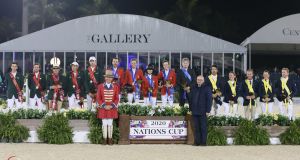 Ireland had to settle for second place for the third year in succession in the four-star show jumping Nations’ Cup which was staged under lights at the Palm Beach Equestrian Center in Wellington, Florida on Saturday night.

Nine nations started over a track designed by the USA’s Ken Krome with Colombia, Mexico and Chile failing to progress to the second round. At the halfway stage, the host nation was the only team on a zero score, followed by Ireland on five faults with Canada and Brazil sharing third place on 13.

In the second round, two of the Americans again jumped clear – Andrew Kocher (36) on Squirt Gun and Brian Moggre (18) with MTM Vivre le Reve. Lucas Porter (22) had a fence down with C Hunter but, as the team couldn’t be beaten, there was no need for Adrienne Sternlicht (26) to jump again with Just A Gamble, the quartet completing on just four faults.

Ireland picked up eight faults in round two but still held on to second place as Australia, who were lying joint-fifth at the halfway stage on 17 faults, moved up to finish third on a two-round total of 22.

Kenny, who is among a large Irish contingent due to compete in Sunday’s $214,000 Grand Prix at the Palm Beach Equestrian Center, warmed up for the Nations’ Cup on Saturday by winning the $50,000 national Grand Prix on Ann Thompson’s 12-year-old Belgian Warmblood gelding, Important De Muze.

The Co Meath rider topped the marks of three of the five judges in the Al Shaqab indoor arena for a combined score of 70.043% with the 14-year-old British-bred gelding Snowdon Faberge which she owns in partnership with her mother Maureen and Alan O’Connor. Belarus’s Hanna Karasiova was second on Zodiak (69.106) with Germany’s Jill de Ridder placing third on Whitney 341 (69.085).

“I am so, so pleased with Fabio (Snowdon Faberge) today,” said Dwyer. “The feeling he gave me in the ring was amazing. The whole test felt much more confident and I really feel we showed a lovely harmony which is so important in dressage. I am delighted with his performance and I know this is only the top of the iceberg of what he can give me. It’s really exciting because he is actually part Shire. We thought originally that he was part Welsh cob but he is part Shire so he is not your typical dressage horse.”

Kildare-based Cathal Daniels, who was recently acclaimed Ireland’s senior leading event rider of 2019 by both Eventing Ireland and The Irish Field, started his seasonal campaign this weekend at Barroca d’Alva in Portugal where he won both the CCI2*-S and the CCI3*-S.

OLS King Aragon is a nine-year-old Irish Sport Horse gelding by Samgemjee. He is owned Michelle Nelson and Kieran Connors who bred the bay out of their Seamanship mare Just Beauty Queen which competed in two European championships and the 2004 Olympic Games in Athens.

Shannondale Mari, which was ridden by Elizabeth Power when representing the Irish Sport Horse Studbook at the world young event horse championships in France last October, finishing eighth, is by Shannondale Sarco St Ghyvan. She was bred in Co Clare by Martin Walsh out of the Lux Z mare, Shannondale Maria.