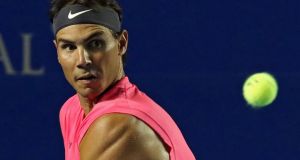 Rafael Nadal: ‘Hopefully this problem in the world is controlled, can be solved as soon as possible.’ Photograph: David Guzman/EPA

Whatever they are saying about the coronavirus, the International Olympic Committee (IOC) is still saying nothing about its potential impact on the Tokyo Games this summer beyond the fact preparations are continuing unhindered.

IOC president Thomas Bach told Japanese media in a conference call Thursday that the IOC remains “fully committed to a successful Olympic Games in Tokyo starting July 24th” and also refused to discuss any alternatives like postponing, moving or cancelling the Games should the coronavirus still be a matter of concern in or around that time.

The Olympic torch relay will begin on March 26th and continues throughout Japan in the run up to the Games, are there no plans to cancel or downsize that. It remains highly unlikely that the IOC, based in Lausanne, will elect to cancel the Games, Tokyo already investing more than $26 billion (€23 billion) in preparations since it won the bid in 2011, with more to come.

Some former and present Olympians are beginning to have to their say: Australia’s five-time Olympic swimming champion Ian Thorpe reckoned athletes should not put their Olympic dreams before their health in deciding whether to compete in Tokyo.

“I would most definitely be concerned” Thorpe the told reporters in Canberra on Thursday. “What we need to know is to use some of the best expert disease specialists to find out what is the risk to the team. What is the risk to the other nations and how can we have an Olympic Games, one that is safe, that doesn’t put athletes at risk?

“I think the decision should come down to each individual athlete. But whether or not they want to compete, that they should take their health into consideration first.”

Spanish tennis player Rafael Nadal was more positive about his chance to compete in Tokyo: “Hopefully this problem in the world is controlled, can be solved as soon as possible, that the remedy that is needed can be found and that this uncertainty, this psychosis and this fear that exists towards all this be stopped.

“It is important not only for the Games, for humanity in general. For me the Games are a unique event, it is the most difficult event to win because you only have one, two, or at most three opportunities in your career.”

In the meantime the coronavirus continues to impact on sporting events around the world, the significance depending largely on what that event means to the sport: the annual Engadin ski marathon in Switzerland, one of the world’s largest cross-country skiing events with around 14,000 participants, has been cancelled because of concerns over the coronavirus.

Switzerland confirmed three new cases on Thursday, taking the total to four, including a couple in the canton of Grisons where the 42-kilometre race was due to take place on March 8th. It is only the second time in its 51-year history that the race, Switzerland’s largest mass sporting event, has been cancelled. The 1991 event was called off because of warm weather.

Two professional golfers, one of whom is the brother of Francesco Molinari, were however reinstated at the last minute for this week’s Oman Open on the European Tour after being isolated to determine whether they had been infected; Edoardo Molinari and Lorenzo Gagli of Italy were to be roommates for the Oman tournament and began play on Thursday after testing negative.

Italian football continues to be hit by the coronavirus, with the first professional player diagnosed with the illness: a 22-year-old player for Serie C Group A side Pianese tested positive after feeling unwell at the weekend, the symptoms keeping him out of a match with Juventus’ Under-23s side.

La Gazzetta dello Sport report that he is thought to have caught the virus while on a train ride to visit his parents in nearby Emilia. The Regional Council of Tuscany confirmed the case on Thursday, the player involved remaining unnamed.

The most eagerly-awaited Serie A match of the season takes place on Sunday when leaders Juventus host third-placed Inter Milan yet, like the rest of the programme, uncertainty hangs over the match.

After four matches were postponed last weekend, the Italian government banned all sporting contests in six regions on Monday although it accepted a request from the country’s soccer federation for Serie A games in the affected area to go ahead without spectators.

The other four games – Lazio-Bologna and Napoli-Torino and Saturday and Lecce-Atalanta and Cagliari-AS Roma on Sunday – could be played with spectators, it ruled.

So far, however, the Serie A league has yet to issue a statement confirming these arrangements, although on Thursday ANSA news agency published the list of referees for the games.

The final two stages of the UAE Tour are also to be cancelled amid fears that the coronavirus may have been carried into the race.

The Vini Zabú-KTM and Jumbo-Visma teams tweeted that the race has been cancelled, Jumbo-Visma cycling saying in a Tweet: “We have taken note of the cancellation of the UAE Tour due to the occurence of the coronavirus. We wish all the people involved the very best, awaiting further developments.”

There have been 13 confirmed cases of coronavirus in the United Arab Emirates, nine of whom have recovered and none died.