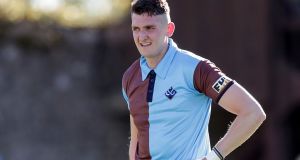 The much-anticipated top of the table clash between Monkstown and Lisnagarvey was the one tie of the men’s EY Hockey League to fall victim to Storm Jorge at half-time.

A mixture of high winds and heavy hail made conditions too challenging to continue. As early as the 10th minute, the game had to be paused as one of the advertising hoardings blew onto goalkeeper David Fitzgerald and while play continued, abandonment seemed inevitable.

Monkstown – hoping to cut the gap to leaders Lisnagarvey to two points – were 2-1 in front at half-time when play was formally called off.

It was a frustrating outcome with a refixture date now to be sought. Questions have been asked online about whether this and other matches should have gone ahead.

The match official confirmed both sides followed the protocols correctly, agreeing to try and get the game played despite concerns over the weather, with the ultimate decision to abandon the game a reluctant one.

The difficulty in making the right decision this weekend was the timing of exactly when the storm landed and how severe it proved, with earlier pitch inspections not having any impact on decisions.

Glenanne’s 6-4 win over UCD just a few kilometres up the road at Belfield started at 1pm and was played out in sunshine with Stu Ronan’s “empty-netter” in the 63rd minute proving the clincher.

Glenanne led all the way but only had breathing room when goalkeeper Max Maguire was shown a yellow card and, without a recognised replacement on the bench, UCD were susceptible to a sucker-punch in his absence.

Three Rock Rovers, meanwhile, made the best of the good conditions in the first 10 minutes against Corinthian, going 2-0 up via Harry Morris and Ben Walker before the situation deteriorated. They held on for a 2-1 win as the pitch became more and more difficult to play on.

The two games in Ulster went ahead as planned with Pembroke beating Annadale 6-2 for the second time in a month. Alan Sothern banged in four goals, making it 10 this term against the hapless Annadale.

Banbridge, meanwhile, scored three times in the last nine minutes to beat YMCA 3-1 despite trailing for almost an hour.