In October 1972 six women sat to improve running for all 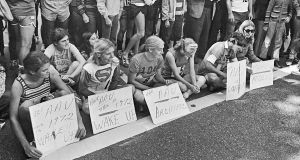 Lizzie Lee became the ultimate hero over the weekend after becoming the national champion at the SSE Airtricity Dublin Marathon. Her time of 2:35:04 saw the 38-year-old crowned the Irish women’s national champion for this year following a superb display in the 26.2-mile race.

What had to be my personal standout moment was her comments afterwards saying she was a mom and that this was just a hobby for her . . . in other words the type of inspiration you’d need to get out and exercise. Lee’s achievement was absolutely sensational, but an anniversary of an event in women’s running caught my attention over the weekend.

You see, it was the anniversary of the six who sat. The six women who sat for change and equality. In October of 1972, at the New York City Marathon Lynn Blackstone, Jane Muhrcke, Liz Franceschini, Pat Barrett, Nina Kuscsik and Cathy Miller all sat to change the Amateurs Athletic Union stance on women running in marathons.

But, before we get into that, let’s rewind it back to 1967 when Katherine Switzer was told by her nicotine-addicted doctor that if she continued to run, her uterus would fall out and she would never be able to have babies. Switzer ignored his advice and managed to keep her uterus, instead choosing to become the first woman to run the Boston Marathon.

So, she entered with her boyfriend, coach and running partner. At that time women were told not to run in case their legs got fat, or their uterus popped out, but if they did decide to run, they could only run a mile and a half.

A mile and a half into her run, Switzer was followed by news trucks and press along with a furious race director, Jock Semple, who tried to wrestle Switzer out of the race and tried to rip off her official number.

Of course, it became a contentious moment, Switzer’s boyfriend punched Jock and Jock told other racing officials to declare Switzer ineligible, denounce her participation and erase her from all competitions. Her time, her presence, nor her run were ever recorded. Switzer was banned by the AAU as if she would contaminate races by merely showing up.

In 1971, a plucky young runner called Nina Kuscsik was doing what Bobby Gibb did years ago – unofficially running marathons going through public streets. Nina was so good, she unofficially became the second woman to have run a marathon under three hours.

Nina was also frustrated by chauvinist and patriarchal AAU and decided to instigate change from the inside out – so she joined the AAU and went to the national convention, where she secured a place for women in marathons . . . but only under certain conditions such as they can’t start alongside the men, they either started ten minutes before them or in a whole other area separately.

Small victories among the narrow-minded – but the race towards for equality didn’t stop there.

A man by the name of Fred Lebowitz – or shall we say a roaming Casanova – saw how women were being discriminated against. He had the idea to make the New York City Marathon the biggest and best marathon in the world. As Nina Kuscsik put it, Fred knew how to manipulate women but knew how to manipulate for women.

In 1972, Fred, Nina and Johnson’s wax collaborated on a New York Marathon sponsored by a new Crazy Legs Wax. Fred hired women with great legs, including Playboy bunnies and entrants who all wore mini skirts – after all, it was a publicity stunt to showcase women could run, have great legs and wear mini skirts for six miles or a lap around Central Park. Sadly, the Playboy bunnies weren’t in the mood, but 78 other women ran with the crazy idea.

But then the real movement occurred. In April 1972, more women unofficially entered the Boston Marathon. In May we had the Crazy Legs Mini Marathon, and in June, US president Nixon signed Title IX which levelled the playing field effectively for women in sport.

In October, the real plan was hatched by Paul Fletcher, VP of New York Road Runners Club, Fred the self-promoter, and Nina, the woman who just wanted to run. So, they met in a subway and came up with a protest for the next New York City Marathon. Fred could get his marathon promoted, and the women could enter the race and stage the now infamous sit protest.

A total of 278 runners showed up on that October morning with six of those being women. As was customary, they were at the starting line ten minutes before the men’s race.

They stood at the line. The gun went off . . . but nobody moved. Instead the six women, Lynn Blackstone, Jane Muhrcke (who was wearing her husband’s Superman t-shirt holding a sign saying “Hey AAU, it’s 1972, wake up), Liz Franceschini, Pat Barrett (who did not know all of this was happening), Nina Kuscsik and Cathy Miller sat down and stayed put.

As the ten minutes passed with photographers clicking and the New York Times began writing about a woman in sport rather than a good-looking woman in sport, the men congregated for their race.

As the gun sounded for the men, the women hopped up and ran alongside them. The women all finished with a ten-minute penalty, but the change was being called for.

These women, along with Lizzie Lee, became instant heroes and showcased that the real beauty in running is that running allows everyone to become a hero in their own life.