Sonia O’Sullivan: Getting a proper sense of perspective for Croke Park

Once on the pitch, you immediately realise you are just one of 15 on a huge field of play 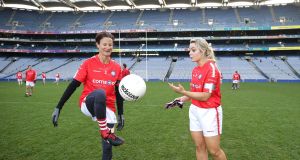 Sonia O’Sullivan and Anna Geary warm up before the Croke Park Charity Challenge between Cork and Mayo in support of Self Help Africa and Alan Kerins. Photograph: Damien Eagers 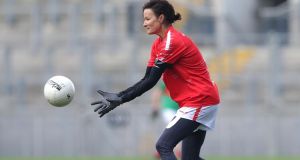 Sonia O’Sullivan in action for Cork: “It’s unlikely I’ll be getting a game with the Cork ladies anytime soon.” Photograph: Damien Eagers

I’ve been to Croke Park many times over the years, watching All-Ireland finals in football and hurling, women’s football and camogie, without ever really getting a proper sense of the place. In size, that is.

On a few occasions I did get to run around the perimeter of the pitch ahead of the football or hurling finals, like in 1998, after winning two gold medals at the European Championships in Budapest, and again in 2000, after winning the Olympic in silver in Sydney.

It definitely felt like the greatest sporting stage in Ireland, the revered turf that very few of us ever get to set foot on. Still, I never actually got the proper sense of scale.

Until Tuesday evening, that is. Without really knowing what to expect, I’d been invited to join in a very rare opportunity to play a game of football at Croke Park. It wasn’t just a kick around; this was a real game-day experience organised by former Galway footballer and hurler Alan Kerins and the Self Help Africa project, giving us all a proper sense of perspective in other ways too.

I never really thought about what it would be like to line up and play a game of football. It was never really in my make up to play team sport, so I never really had that dream or even thought of playing on the biggest sporting stage in Ireland.

I always had a team around me as I prepared for championship events and raced around the world. Then when it came down to it, I was always lining up by myself on the start line. It was all down to me – what I had to give on the day, no one there to help me through.

I did sometimes wonder if it would be possible to hide in a team sport, if say you were less than 100 per cent on the day. Something a lot more difficult when you are all alone, no one to share the load and take a bit extra on, so you could still play your role on the team. Or even just come on and make an impact for a section of the game.

Maybe I could just sit out a few laps, and join in for that final sprint to the line, like it was a World or Olympic final?

A number of sports celebrities were asked to come along and join in with the 100 people that signed up to support the Alan Kerins project and share the once in a lifetime experience. This event has only been held twice before in 2011 and 2013.

This year it was a game between Cork and Mayo, the team managers Fianna Fáil leader Micheál Martin and former taoiseach Enda Kenny, taking charge of their native counties. There were also four panels, and everyone got to play two games.

The day began with lunch at Leinster House where we were welcomed and given a brief of what lay ahead for the day. We also got some insight into the work carried out in Africa through Self Help Africa, which everyone was supporting by signing up for the day and giving their time. People from all over Ireland, America and Canada had travelled to be a part of this special day.

Then there was a police escort to Croke Park, mimicking All-Ireland final day, two buses entering under the stand just like we were playing in the final proper.

The gear was distributed in the players’ lounge, then we were assigned to our teams. For some it was easy; alongside myself were Anna Geary, Rob Heffernan, Seán Óg Ó hAilpín to sign up to our county of birth. Cora Staunton was there to captain the Mayo side alongside the likes of Aidan O’Shea and Tony McCoy.

I have never played a game of football in my life, never even worn a pair football boots, and of course never been in such a busy, noisy dressingroom before stepping out into the unknown. Nervously too.

Once we ran out to the pitch, then you immediately realise you are just one of 15 on such a huge field of play. You start to feel very small and intimidated by the distance from one end of the ground to the other and also across the middle.

We were given our positions, which didn’t mean much to me. I just needed to mark up and run around and there is a lot of running around to be done on the 145m length of the pitch, and the 88m in width.

When you’re only on the pitch for 30 minutes you want to try to get close to the ball, at least to see what’s going on and the slight chance you might get a touch of the ball. Then you find yourself flying down the pitch trying to defend and keep the green and red Mayo shirts at bay.

For all the times I’ve watched football finals and how it looks so easy, it’s a different task altogether when you get out and try to replicate what the best can do.

It was a mixture of men and women so it wasn’t always easy to keep up but the speed and ease that Staunton took the ball and weaved between the midfield players was magnificent. She glided across the field and held her own, meanwhile I was just racing up and down the pitch. I think I touched the ball once, kicked it once, missed it a few times. It’s unlikely I’ll be getting a game with the Cork ladies anytime soon.

Physically, it felt different too. Initially you feel out of breath with all the short, sharp sprints then you work out the time to walk at pace or jog around so you don’t have to run the whole length of the pitch in one go.

The final came down to a short game of just 10 minutes, with Mayo getting the early momentum and stealing the first few points on Cork. We were just about warmed up and ready to challenge and then the final whistle blew. It hardly mattered. To play on such a big stage certainly opened the eyes a little to what it’s actually like for teams to play in Croke Park.

Running around an athletics track, the dimensions never change; its always just 400m, so you always know where you are on the track. In Croke Park the perimeter is 466m, which doesn’t seem so much bigger, but you get the feeling you cover a lot more ground and at greater speed chasing the ball, marking your player, and having little or no idea of the perspective of being in the middle of the field.

We are all experts in the stands and on the couch, but when you try something for the first time you realise there is so much more to a game of football. I think I’ll just stick to running laps and put the football boots away for a while.

1 Waterford turn Kilkenny upside down and inside out
2 Ireland’s work-ons: Four things Andy Farrell needs to address
3 Jim McGuinness: There is a way to save championship and make it competitive
4 Sordid murder of hurling brothers still resonates in south Galway
5 Conor Gallagher gets West Brom off the mark as Blades blunted yet again
Real news has value SUBSCRIBE
Here is your handy guide to sport on television this week