Djokovic regains No1 spot after Nadal withdraws from Paris 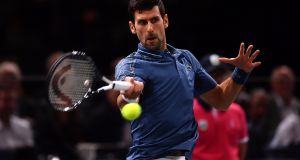 Novak Djokovic of Serbia plays a forehand during his second round match against Joao Sousa of Portugal during Day 2 of the Rolex Paris Masters. Photo: Justin Setterfield/Getty Images

Rafael Nadal has withdrawn from the Paris Masters due to an injury, a move that means Novak Djokovic will take over as world No1 when the new ATP rankings are announced on Monday.

Tournament organisers in Paris announced on Wednesday that Nadal had pulled out due to an abdominal strain. An official statement, posted on Twitter, read: “Rafael Nadal has withdrawn and will be replaced by Malek Jaziri who will face Fernando Verdasco in the last match of the daytime session.”

Speaking at a press conference the same day, Nadal said: “I arrived here a couple of days ago, as everyone knows I have been outside of the competition since the US Open. I took time off, I came back and it was great to be in Paris for a couple of days and practise with the guys.

“I enjoyed it, I feel, in terms of tennis, better than what I thought one week ago, but in the last few days I started to feel a little bit abdominal pain, especially when serving. I checked with the doctor and the doctor recommended I did not play.”

The 32-year-old needed to beat Verdasco to hold Djokovic at bay at the top of the rankings. The Serbian, winner of this year’s Wimbledon and US Open titles, will now return to top spot for the first time in two years regardless of how far he goes in Paris. He reached the last-16 by defeating João Sousa on Tuesday.