Tyler Bleyendaal to return for Munster after eight months out 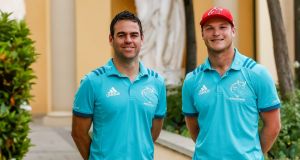 Tyler Bleyendaal’s eight month injury absence will come to an end this Sunday when he lines out as Munster captain for their Pro14 clash with the Cheetahs in Bloemfontein (2.45pm Irish time, live on eirSport and Premier Sport.

The 28-year-old Kiwi underwent neck surgery in March and has now completed his rehabilitation after lining out for Munster A in the Celtic Cup earlier this month.

“It’s brilliant to have him back. He played 30 minutes for the A team against Leinster a few weeks ago and we have been monitoring him the whole time, he is itching to go,” said Munster coach Johann van Graan from their Johannesburg hotel after completing training.

“He will start this weekend and he will also be the captain, something he has done before for Munster. It’s great to have him back in a leadership role and it’s great to have a quality player back who has been out for a really long time.”

Meanwhile, Sammy Arnold continues to undergo return to play protocols after failing a HIA during the dramatic win over Glasgow Warriors at the weekend.

Dan Goggin has seen a specialist and will continue his rehab under the guidance of the medical department for the next number of weeks, while Tommy O’Donnell and Rhys Marshall are being treated for respective medium-term ankle and hamstring injuries.

Billy Holland did not travel due to personal reasons.