Mayo woman Sinead Diver chasing a 2:30 Melbourne marathon while living Down Under 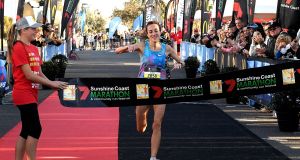 The growth of road-running and mass participation events around the world has been steadily increasing in recent years, and Ireland is no exception. For the last decade the numbers have been steadily rising year-on-year, with no sign of them slowing down.

More people are running and running more, setting targets to run further and faster each year. Yet for some reason these masses of runners haven’t yet directly influenced the more pointed end of racing, as in faster times and more elite runners.

I can still relate closely with women’s running times. My understanding of the pace required for specific target times means more to me because I know what it feels like to run fast – and slow – over various distances.

There is a huge difference in what is required to be more than just the best in Ireland – where you can turn up at any local road race and win easily – and the opportunity of competing internationally.

To me the basic benchmark for elite women is 70 minutes for the half-marathon, and two hours and 30 minutes for the full marathon. These are the standards we need to be looking at to stand any chance of being competitive in any international road race, especially the Olympics, World Championships and European Championships.

Yet these numbers haven’t been touched by Irish women in over 13 years.

When I thought about this number recently I found it astonishing that with the developments in nutrition, physiology, psychology, running shoes and technology there are no Irish women who have been able to reach this level.

What also made me think about it was the fact that there is one Irish woman who has achieved this level, but due to a technical change of qualifying standards in Ireland in 2015, she was denied the chance to run for Ireland at the World Championships in Beijing. Her name is Sinead Diver, and she lives in Melbourne.

Sinead grew up in the west tip of Ireland in the town of Belmullet, Co Mayo. She played basketball at Our Ladies secondary school in Belmullet, and while studying at University of Limerick, but didn’t discover her natural ability for competitive running until after the birth of a son in 2010, at the age 33.

This is the age when many international runners are starting to slow down, and starting to wonder how many more years of running they can get in at a high level. I’ve always believed that it takes seven years of commitment to reach a consistent high level of training and racing, a stage where you are at the peak of your ability. Sinead has shown that starting later in life doesn’t change this general rule.

Like anything, when you discover you are good at something, and start to achieve, you continually try to find ways to improve. Sinead started to win state championships, then national championships, improving her times every year.

Now aged 41, she is reaching the peak of her career, and has run under 70 minutes twice already this year, and also gone under 32 minutes for 10km on the road twice.

This includes victory in the Sunshine Coast half-marathon in 69:20, winning by 13 minutes, and the Adelaide City Bay run 12km, clocking 37:54 and breaking the 19-year course record, going through 10km in 31:30.

Sinead is now on course to be the first Irish woman in over 13 years to break two hours and 30 minutes for the marathon when she takes on the Melbourne event in two weeks’ time.

Sinead has run the Melbourne marathon before, when she had her breakthrough in 2014, and qualified for the World Championships running 2:34.15, well inside the IAAF standard of 2:44, yet just 45 seconds short of the strict Irish standard which denied any Irish female athlete the chance to line up at the 2015 World Championships in Beijing.

When you are 38 years old and you’ve never been to a World Championships it’s hard to take too much time to weigh things up when you are invited to run for your adopted country, which is exactly what happened in 2015.

Injury denied Sinead the chance to compete at the Rio Olympics, so the motivation is still there to chase the Olympic dream, and continue to run fast times.

The course record for women at the Melbourne marathon is 2:26.05, run by Australian athlete Lisa Weightman in 2013, so it’s not a slow course; when running a marathon it all depends on the day and everything falling into place.

Last weekend the Ireland Funds annual Run the World 5km event took place at Albert Park lake in Melbourne. I invited Sinead to come along as a guest and to introduce her to the local Irish community, to help ensure she gets lots of support on the streets of Melbourne during the marathon.

When Sinead turned up last Saturday morning she had just completed a 39km training run and was ready to join in the 5km fun-run for a few fast kilometres at the end of her last long run before the marathon. She was easily the first across the line, in just over 16 minutes, though I’m not sure many looking on as she led around the lake truly knew what a great effort that was.

By now Sinead is well known in running circles throughout Melbourne and Australia, but nowhere near the exposure and adulation she would receive back home in Ireland. There was evidence of this in 2016 when Sinead was cheered home and took victory in the West of Ireland women’s mini-marathon wearing her Mayo athletics club colours through the streets of Castlebar.

It’s one of the glitches in the IAAF system that every athlete is painted with the same brush when it comes to the country you represent and the country you are from. Down through the years many athletes and some countries have abused the system and because of this genuine cases are not looked at individually. Should there be an exception to allow athletes such as Sinead run for her country of birth?

There’s no doubt Sinead is an Irish athlete, and just because she lives on the other side of the world doesn’t mean she should be any less celebrated as our current best marathon runner when she takes to the streets of Melbourne and chases the two -hour 30 minute mark.