Philip Browne: ‘We simply cannot afford to have a separate Sevens and 15s programme,’ 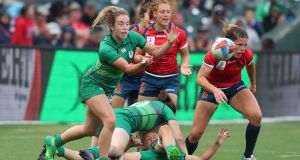 Lower ambitions is the clear IRFU message in their Women in Rugby – Action Plan 2018-23. Objectives for the Six Nations up to 2023 is one title coupled with a “consistent top three finish.” Qualification is the hope come World Cup 2021 and, following that, a “top six finish.”

Similarly, the ever expanding national Sevens programme seeks participation at the Tokyo 2020 Olympic Games. Medals are not mentioned.

Sevens, the evidence increasingly indicates, has become the primary means of growing female rugby in Ireland.

“It is an easy way into the game,” explained David Nucifora, the IRFU Performance Director. “Rugby can be a complex game to play and learn. Sevens as an Olympic sport means we can bring young players into an uncluttered, simpler to learn game and they can go on to play 15s.

“Once we get new people into the game they can choose. We have to help clubs to build those bridges to be able to leverage off the schools system – with young girls playing Sevens so they can get into the clubs to play 15s rugby.”

The aim is to develop Sevens in 150 female secondary schools in order to create a direct pathway into the club game.

For the expansion to work an increase in female coaches, from 179 to over 450, would be required. An immediate issue is 65 per cent of people canvassed, across the entire women’s rugby landscape, “believe no clear female coach pathway” exists while “83 per cent felt a greater challenge than male counterparts.”

This follows an exhausting review process since the failed 2017 World Cup campaign.

The IRFU have committed to supporting 100 clubs to develop pathways from mini rugby through to adult squads. An increased investment in the game, from €13 million to €17 million, is promised.

People at grassroots level, who spoke to The Irish Times, do believe the interchange between Sevens and 15s is more feasible in the female game as the focus for improving standards in both sports currently demands skill development.

“We simply cannot afford to have a separate Sevens and 15s programme. Part of that is obviously finance but the more important part of it is we don’t have the number of players to actually sustain two different, fully supported, programmes.

“We are going to be putting €17 million into the women’s programmes, which includes the high performance programmes running from under-18 15s and under-18 Sevens right through to the 15s and Sevens programme.

“Our commitment is to equally support both,” Browne stated. “It has to be. Sevens is an Olympic sport and as a tier one nation we have to have a Sevens programme. Equally, the 15s programme is important as we know it is a game for all people, for all shapes and sizes. That’s an important part of what we do as a sport.”

A clear barrier to fluid integration between both sports is the ongoing schedule clash between Sevens tournaments and the Six Nations in 2019.

There is no plan to follow England and New Zealand down the professional road but 15-a-side Ireland players are now receiving payments for national camps and games, to cover loss of earnings and avoid a reliance on taking holidays to represent their country, while Wayne Mitchell has been confirmed as the new national talent identification co-ordinator.

To ensure the strategy is rolled out in full, Quinn will chair a women’s rugby advisory group that intends to meet more than the stated biannual formal gatherings.

“If you sat every six months and did nothing in between you’d be pretty useless,” said Quinn. “Frankly, we will be getting and seeking information right across the game and in the provinces to make sure the action plan is happening.”

‘We want to build a cohort of women’

The plan states that committee and management roles will increase female participation from two per cent to 20 percent by 2023.

Currently, Mary Quinn is the only women on the IRFU committee with Su Carty recently becoming the third Irish representative on the World Rugby Council while former international outhalf Nora Stapleton is part of the union’s management staff.

“At the end of the day we are a democratic organisation with a representative structure,” said IRFU chief executive Philip Browne. “What we would like to try and do is build a cohort of women who are effectively helping to administer the game at club level and coming through at the provinces and then up to the union, hopefully.

“We are not like a company board that can simply co-opt people on. It’s a representative structure. Mary Quinn and Su Carty have been a great addition to the union committee in terms of the work they have done for the women’s game but more importantly the views they have about the rest of the business is all important.

“All our sub committees we are insisting they have female representatives,” Browne added. ”We are looking for the same thing to happen at provincial level. We are encouraging women to get involved in the running of the game, at all levels, but it has to start somewhere and so we are trying to start with the leadership programme to build that cohort of women who are interested in getting involved and running the game.

“Yes, it is an ambitious target but there is a governance review going on at the moment. We are conscious we have to embrace the diversity of the board table and of the union committee.”