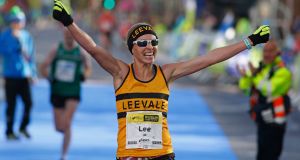 It’s no great surprise that Lizzie Lee stole most of the headlines after Sunday’s Dublin Marathon.

Even if she wasn’t the outright women’s winner, her third place overall, and the first Irish woman, earned her plenty of praise to go with her first Irish national marathon title.

It helped that Lee is well known to many of those lining the streets in Dublin to cheer the runners on, given her familiar presence on various Irish teams over the last few years, including the European Championships in Berlin last August, the 2016 Rio Olympics, and plenty of European Cross Country championships too. Her yellow colours of Leevale AC were instantly recognisable too.

It’s always been important for spectators to be able to relate to the athletes they’re watching, and Lee certainly provided that with her third-place performance and the celebrations which came with it – unlike the first- and second -placed women from Ethiopia, Mesera Dubiso and then Motu Gedefa.

Even with a bit of time spent searching the internet, including the IAAF page with details of all international athletes, there was very little information to be found on most of the Ethiopian athletes that graced the start line in Dublin, including the men’s winner Asefa Bekele. Though as a third time returning athlete to Dublin, it could easily have generated interest in his return to finally win the Dublin marathon

The Dublin marathon organisers don’t pay appearance fees but instead offer a healthy prize fund, €12,000 for each winner; it wouldn’t be right to close the race to foreign elite athletes, but there should be some media interaction pre race, if inviting these hand-picked athletes to the start line.

Otherwise its harder to connect to their performances. That’s why it’s even more important for the top Irish marathon runners to race in Dublin, and generate some local excitement.

We saw that too with Mick Clohisey’s sixth-place overall and his status as top Irish finisher in the men’s race _ the fastest by an Irish man in Dublin since 1999.

But many women can relate to Lizzie Lee in another way too, given she’s the mother of two young daughters, aged four and 16 months, and at age 38 is showing no signs of slowing down.

She’s certainly an inspiration and a role model for mothers across the country, athletes or otherwise, given all her achievements of late.

This is not a new trend, women athletes coming back faster if not stronger after childbirth, but it appears to be a little more prevalent; we saw it earlier this month too with Mayo native Sinead Diver winning the Melbourne Marathon in a world-class 2:25:17, now aged 41, and with two sons now aged five and eight.

Diver is certainly pushing the invisible boundaries that can sometimes creep into a woman’s timeline when they take time out to start a family and, like Lee, is certainly not slowing down, eyes now firmly fixed on the Tokyo Olympics.

I remember back in 1998, 20 years ago, when I was first pregnant with my oldest daughter Ciara, it felt like a giant step into the unknown. Back then there were very few athletes I knew who had trained through pregnancy and returned to international competition.

One athlete I could relate to was Scotland’s Liz McColgan, as she had a pretty good timeline to align with. It just took one example for me to see what was possible: McColgan won a silver medal at the World Cross Country just four months after the birth of her daughter, Eilish, and later that same year in 1991 won the World Championship 10,000m in Tokyo.

When I think back now there were others, including Maeve Kyle, the first Irish woman to compete for Ireland in the Olympics in Melbourne 1956, who also had a two-year old daughter at the time. So it’s certainly not a modern trend.

Back then it was just one of those things that people didn’t really talk too much about.

It seemed each athlete just figured out what worked best for them, knowing it had been done before, but with a fair bit of guess work too, hoping that things would work out and they would be able to return to competition.

Now I think women can look ahead more confidently to returning to athletic pursuits after childbirth, with evidence all around that motherhood can have a very positive effect, both mentally and physically. My own theory was that if you stuck to what you normally do every day as much as possible then nothing dramatic should change.

It also seems a lot easier now to look back and understand better the benefit of pregnancy and childbirth in an athlete’s career. People like to talk about a physiological benefit, which is possible, and I’m sure there are a number of factors that allow women to continue their sporting careers after childbirth, and some even at a higher level than before they had children.

I think the advantages may actually be more psychological. There is an intensity and monotony to elite training that can lead any athlete to plateau at a certain level, and sometimes a change is required to allow them to return to competition at an even greater intensity than can be planned into a training program.

The problem is most athletes are very reluctant to make changes in the routine they have settled into year after year. It is only when they are forced into a natural change, such as pregnancy, that they can fully absorb the changes, and then take advantage of the renewed energy and motivation after childbirth.

There’s also the sense of contentment that can filter in and allow the female athlete to intensely focus during training and racing time, then step away and relax between training sessions to look after their child, and take the focus away from themselves.

There’s not as much time to dwell on training and analyse races too much, and this is important too, to equally enjoy the time away from training and competition with their children.

It’s the same with the many mothers around the world working in demanding jobs. They don’t get the same public admiration as the athlete,  because it wouldn’t always be known, and yet it can still be a surprise to some that a mother can still compete at the highest level.

It takes great discipline to be an athlete, and when a child is born this discipline doesn’t just disappear; if anything the training and racing must be even more efficient, and sometimes the potential to share the rewards on race day can push the mother to deliver even greater results.

It’s not easy to explain to a young child why you didn’t win the race, or at least get a medal, and maybe that helps to push that little bit harder, to be rewarded and the time spent training and away from the children feels even more worthwhile.

I’m sure every mother will have their own take on how pregnancy, childbirth and motherhood can have a positive influence on the daily physical and mental demands of any career.

When returning to any sport after childbirth I think the athlete finds a piece of themselves that allows them to push through pain, appreciating being able to compete again at the highest level.

When there is always the small doubt in your mind that you may not get back to where you left off, there’s an even greater sense of satisfaction when you surpass pre-pregnancy achievements.

And naturally get to share it with your young family.