America at Large: Shilling for Trump could pay off for Schilling 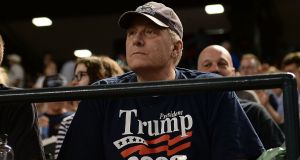 Former baseball star Curt Schilling has been one of the more high-profile supporters of Donald Trump. Photograph: Jennifer Stewart/Getty Images

In the closing weeks of the 2016 US presidential election, former Red Sox pitcher Curt Schilling hosted a rally for Donald Trump supporters outside Boston City Hall.

The man who once defeated the New York Yankees in an epic playoff with blood seeping through his sock from stitches in an ankle wound, a revered character in the town’s sporting history, attracted just 15 people to the event.

His pivotal role on the 2004 team that won the World Series and lifted the curse of the Bambino counted for little as he cut a forlorn, lonely figure, standing beneath an awning on the plaza, one more athlete wondering perhaps where he found himself now the cheering had stopped.

Of course, Schilling had the last laugh at the ballot box very soon after, and the man he was trying to help that embarrassing afternoon certainly didn’t forget his efforts.

When he announced last month that he may try to win a seat in the House of Representatives from his native Arizona, Trump took to Twitter immediately to herald the news and big up the candidacy.

“Curt Schilling, a great pitcher and patriot, is considering a run for Congress . . . Terrific!” To understand why the present incumbent of the White House is such a fan of the pitcher’s political prospects, it’s necessary to outline some of the topics he’s railed against in recent years.

Ticking all the Trumpian boxes, Schilling has described global warming as “a complete hoax”, disputed the science of Darwinism, claimed a teenage survivor of the Parkland school massacre was a paid crisis actor, and reckoned the appearance of a blood moon was some sort of divine warning about Barack Obama doing a nuclear deal with Iran. He’s also called for all immigration to be suspended after terrorist attacks, promoted execution without trial for certain suspects, and declared Hillary Clinton (whom he often calls “Killary”) “should be buried under a jail somewhere”.

“Right now, it’s something in the ‘I’m considering it’ stage,” wrote Schilling, responding to initial speculation about a possible future career in Washington.

“The state is not the state I grew up in. Making Arizona citizens of EVERY race, religion and sexual orientation 2nd class citizens to illegal immigrants is about as anti-American as it gets. When you have homeless veterans, children, and you’re spending tax dollars on people smuggling drugs and children across our border someone in charge needs their ass kicked.”

During his two decades in the majors, Schilling won 216 games on the way to three World Series triumphs, garnered six All Star awards and threw for over 3000 strike-outs.

While the statistics are impressive, his true greatness was as a clutch pitcher in the playoffs and as one of the few active players who broke the omerta about the steroid epidemic, even testifying before Congress about the damage being done to the sport. Somebody that outspoken was made for a job in television and he briefly flourished as an analyst on ESPN until his social media activity made his position untenable.

First, he tweeted a meme comparing Muslims to Nazis that earned him a suspension from the airwaves in 2015. Having put out more anti-Muslim material in the meantime, he was eventually fired for sharing a Facebook post making fun of transgender rights.

Inevitably, he saw a conspiracy theory in his ousting, claiming he was discriminated against for his conservative views. In a similar vein, he reckons liberal sportswriters are keeping him out of the baseball Hall of Fame (statistically he’s considered a borderline case) even though those same voters have endorsed plenty of his peers who also lean to the right politically.

Then again, that hardly describes where Schilling now resides on the spectrum. It’s a long way from using a “Good Morning America” interview to urge viewers to vote for George W Bush in 2004 to hosting a radio show on Breitbart, the alt-right website, where his guests have included a white supremacist.

A saunter through his Twitter feed reveals a man who spends his time breathing the toxic fumes of the extremist fringe. He’s posted about Hollywood elites sacrificing child actors in rituals and, just this week, retweeted somebody claiming South Africans had invented a tale of social injustice and fomented racial tension to bring in communism.

This lunatic stuff keeps him in the headlines and he retains a media profile that may yet prove enough to get him elected in Arizona. His would certainly be an interesting campaign. The moment Schilling starts attacking Democrats about welfare and socialism (a favoured topic of his during the Obama years), opponents will point out this guy took a $75 million grant from the taxpayers of Rhode Island to relocate his video game production company there. Following one failed release, that outfit went bankrupt owing creditors, including the state, over $100 million. How very Trumpesque.

The son of a master-sergeant in the 101st Airborne Division, Schilling is a keen student of military history and, among his vast collection of second World War memorabilia, he especially cherishes a brown beret worn by Field Marshal Bernard Montgomery (Monty) during his successful North African campaign. Of course, Monty was a huge fan of apartheid, dreamt of a white supremacist future for that entire continent, and when Britain legalised homosexuality in 1967, declared, “This sort of thing may be tolerated by the French – but we’re British, thank God!”

A man after Schilling’s own heart.