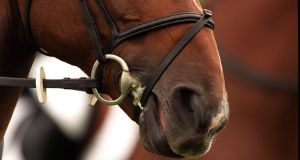 The world breeding championships for young show jumping horses at Lanaken in Belgium takes centre stage in equestrianism this week.

The Irish contingent had a good start to proceedings on Thursday with two of the country’s leading young riders finishing in the top 20 of the first seven-year-old qualifier, a 1.40m two-phase class, which attracted 201 starters.

The class was won by Italy’s Lorenzo du Luca riding the Belgian Warmblood mare Malissa de Muze (31.18) with Seamus Hughes-Kennedy (17) from Kilkenny finishing sixth on his mother Clare’s Irish Sport Horse mare Cuffesgrange Cavadora (32.65). The bay by Z Wellie 72 is out of the Luidam mare Cuffesgrange Cavalidam on which Hughes Kennedy won the inaugural running of the FEI Ponies Trophy Final in December 2017 and has since gone on to European championships success under Max Wachman.

Westmeath native Kate Derwin, who won individual and team gold at this year’s European Junior show jumping championships on AHG Whiterock Cruise Down, finished 17th on MHS Fernhill Showtime (33.27). The grey gelding by Cavalier Royale is owned by Carol Gee at whose Kilkenny yard 17-year-old Derwin is based.

There were 265 starters in the first qualifier for six-year-olds, a 1.35m two-phase class, where the honours went to the Czech Republic’s Sara Vingralkova riding the Zangersheide gelding Damocles From Second Life Z (26.63).

Best of the Irish here in seventh was another Co Kilkenny rider, Ger O’Neill, on Julian Pierson’s Killossery Krescendo. The bay Indoctro gelding was bred in north Co Dublin by Frank and Laura Glynn out of the Cruising mare, Killossery Kruisette, and is thus a full-brother to, among others, Killossery Kaiden on which O’Neill won the six-year-old gold medal at Lanaken in 2016.

The first five-year-old qualifier attracted a line-up of 243 horses of which 73 jumped clear including 12 of the 17 Irish starters.

In the Sires of the World 1.40m speed class, which was won by Japan’s Hikari Yoshizawa on Clicksem (clear in 62.87), O’Neill finished fourth on Brendon Stud’s 10-year-old Anglo European bay Warriors Glory (6.22).

Irish international event riders are also in action on both sides of the Atlantic this weekend with the largest representation being at Blenheim in England where, after Thursday’s first session of dressage, Co Down’s Susie Berry is best-placed in seventh in the CCI4*-L on Ringwood LB.