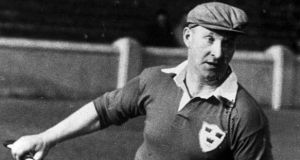 My father was, by then, deep in the fog of Alzheimer’s. He’d put aside forever the paperback novels, the Ludlums and the Van Lustbaders, that once seemed to grow out of his armchair. His glasses case long since gathering dust on the sideboard. Still, I decided to take a chance. I’d written a book about the history of Cork sport, he’d been the esteemed guest of honour at the launch, so I pressed a copy into his hands just to see what might happen. For a second, as he flicked through the glossy photographs, his eyes suddenly seemed a little less glassy. The thousand yard stare not so faraway. He almost looked like his old self.

Eventually, he alighted upon the chapter about Christy Ring. Of course. His one true God prompted him to reach for his glasses and he appeared to start reading, for the first time in an age. Every now and again, he sniggered at some yarn, presumably about Ring’s individual brand of madness, or he muttered to himself about a long ago Munster final, “A great day.” I watched on, thrilled by the sight of this fading fast version of my diminished hero savouring a book that had been dedicated to him because he’d spent my whole life giving me access to our sporting heritage. Then, he caught me looking.

“There’s some very good stories in this,” he said. “You can read it when I’m done.”

An insidious disease at its most darkly humorous. Anybody with experience of Alzheimer’s, those who have endured a loved one receding into the silent season, knows its remarkable capacity to inflict pain on all who wander in its cruel orbit. Yet, that moment with the book and my father was, it seems, not a fluke. All across America right now, nursing homes are promoting something called sports reminiscence therapy, using the games they loved all their lives to engage with patients battling Alzheimer’s and dementia.

Based on an idea that originated a decade ago with Michael White’s visionary Football Memories project in Scotland (which now includes rugby, cricket, shinty and golf), the programmes all follow a similar brief. A group of sufferers are gathered in a room where they are exposed to the sights, sounds and paraphenalia of baseball, the most natural fit for the generation now afflicted by memory loss here, a demographic that grew up in the sport’s golden age when it was truly the national pastime. Theirs were childhoods where fathers played catch with sons of an evening on the front laws of the first iteration of suburban America.

Little wonder then doctors are discovering it can often take just touching the leather of a battered, old catcher’s mitt or running the fingers along the 108 stitches of a baseball to fire up their synapses and spark a vivid recall of a summer’s day long ago. Sometimes just hearing “Take me out to the ball game”, the unofficial anthem sung during the seventh inning of every major league game since forever, is enough to open the gates and illuminate the path down memory lane.

In some cases, not all unfortunately, men and women who now barely speak start talking, sometimes in granular detail, about games they witnessed or Little League encounters they played in when all their world was young. Family members often sit in on the sessions to cherish this fleeting glimpse of a loved one’s eyes lighting up afresh, revitalised by jumpy footage of a World Series or a sepia tinted photograph of a pitcher they idolised as kids. Many of the stories they subsequently dredge up involve the social experiences around the sporting events as much as the actual play by play.

It seems to work in different codes too. In Clemson, South Carolina, locals follow the fortunes of the university’s gridiron outfit every Saturday in autumn with the same passion and fervour of the most rabid hurling or football county. A research team from the college have found Alzheimer’s sufferers at one senior living facility are positively affected by reminiscence therapy that includes rubbing a replica of Howard’s Rock (which the players have always touched when running onto the field before home matches), holding old helmets in their hands and even just wearing the team’s distinctive orange shirts.

It’s not difficult to imagine this translating in an Irish context. Think of the highlight reel available. Maybe a snippet of Micheal O Hehir’s commentary on the 1977 All Ireland football semi-final (“Twenty-nine minutes of this left – Halleluhah!”) or Joe McDonagh’s stirring rendition of “The West’s Awake” from the steps of the old Hogan Stand or perhaps Jimmy Magee’s almost awestruck, “Horst Hrubesch – the man they call the monster”. Who knows what might possess the power to temporarily transport somebody out of the darkness and into the light?

Doctors believe this form of therapy taps into something called “the reminiscence bump”, the part of the brain which allows us to remember most the stuff that left a deep impression between the ages of 10 and 30 years old. If the examples of baseball and gridiron are anything to go by, thumbing the fabric of an old club jersey, tracing the grain of a hurley or wrapping two hands around an O’Neill’s ball might be enough to trigger sense memory in some of the 40,000 Irish with Alzheimer’s.

The power of sport. And the glory.