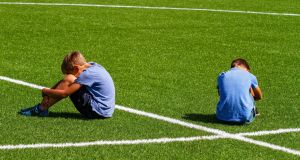 Over the course of nearly two decades knocking around youth sport on Long Island, I have witnessed so many disturbing cameos.

In the video a young girl with her hair in the type of double French braid that is de rigeur on the soccer fields of America sits on the astroturf, looking like she has the weight of the world on her young shoulders. Eventually, she gets up and starts to climb the metal bleachers. Upon reaching the top step, she stands there in her kit and boots, wringing her hands, as if struggling with the task of breaking bad news to an audience gathering below. Then she launches into a soliloquy.

“I’ve given a lot of thought to this and I’m here to announce my retirement from sports,” she says. “Soccer, tennis, volleyball, I’ve taken my game as far as it can go. The pressure it takes to play at nine is not what I expected when I started at five. I’m done with parents picking apart my every move when I just need time to figure it out on my own. I’m through with the coaches that think I’m not strong enough or smart enough even though my body and brain are still growing. I’ll miss my team-mates but I obviously can’t compete on this level. Should I try another sport? I think it’s a little late for that. So I’m just going to retire. Any questions?”

The scene is from a note-perfect commercial called, “Don’t retire, kid”. Aired for the first time on ESPN last month, it is part of a nationwide campaign of the same name designed to try the halt the troubling exodus of young children from organised sport. It may already be too little too late. According to one study, 70 per cent of American boys and girls walk away from their favourite game forever by the age of 13. The most common reason they cite is that it is no longer fun. No surprise at all to those of us who have experienced first-hand the toxic culture created by martinet coaches in search of the next big thing and demented parents trying to live vicariously through the achievements of their offspring.

Over the course of nearly two decades knocking around youth sport on Long Island, I have witnessed so many disturbing cameos. A team of pre-pubescent lacrosse players struggling to run while carrying sledge hammers in a bonkers training routine that seemed to especially delight their watching parents.

A blubbering 10-year-old boy being dragged from the field by an irate coach (who happened to be his father) for staying down injured as a crucial play went on. A mother demanding her talented daughter choose between soccer and lacrosse because she needed to specialise before turning 12 or else she’d lessen her chances of a sports scholarship to college.

I have seen a teenage linesman laid out by a right hook from a 50-year-old man who thought he got an offside call wrong in an utterly meaningless under-14 league game. I once watched a referee stop an under-10 game and refuse to restart until a pair of septuagenarian grandparents, who had verbally abused him from the off, were removed from the field.

Just last week my 12-year-old son showed me his junior high school soccer team schedule which involves 17 “compulsory” training sessions and two games over the first 19 days of the new semester. Because there is no time to waste in the pursuit of glory.

When kids are asked by researchers about why they fell out of love with a particular sport at such a young age, their answers are variations on the same theme. They hate the way coaches talk to them like they are adults and over-react to the events on the field. They resent how their parents critique them on the way to and from matches when they are imprisoned in cars. They dislike travelling long distances for games where they don’t get much playing time because the result is so important that the weaker children can’t be risked for too long.

To some, this winnowing out is natural selection, the weak being culled from the herd. Complaints about children wanting more playing time also feed the narrative of those who believe this snowflake generation are too soft, too used to medals for participation to be able to fight for their starting spot in the team. At, eh, nine.

Of course, anybody who has ever been involved in youth development knows the real tragedy here is many of those walking away are the ones who would have blossomed as they grew into their bodies and minds. If they hadn’t been turned off the sport for life by the behaviour of grown-ups who should know better.

On a glorious Sunday morning last spring, my youngest boy began his soccer journey, playing a 4 v 4 small-sided game where each team was allowed to score into two different goals. It was a wonderful, chaotic and exciting introduction to the sport for a seven-year-old. As we left the complex, both of us buzzing from an hour of unadulterated fun, we came upon a gang of feral parents and an irate coach chasing a referee through the car park. For the crime of blowing up early as their under-13 team was chasing an equaliser, he had to burn rubber to escape the baying mob.

The kids are alright. The adults remain the problem.