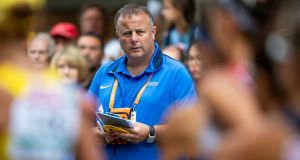 Pierce O’Callaghan: “It will be a little bit different to London all right. That’s not to say there won’t be some great athletics.” Photograph: Morgan Treacy/Inpho

“It will be a little bit different to London alright,” says Pierce O’Callaghan, gently addressing some of the fears and concerns surrounding the World Athletics Championships opening in Doha, Qatar on Friday.

“That’s not to say there won’t be some great athletics.”

O’Callaghan should know: poor ticket sales, stifling heat and a general apathy towards the sport on the tiny Arab peninsula will be in direct contrast to the last World Athletics Championships staged in London, in August 2017, where the overall attendance at the Olympic Stadium topped 700,000, an average of 70,000 per day, comfortably bettering the previous record of 417,156 sold for the 2009 championships in Berlin.

A former Irish international race walker, O’Callaghan, whose family live in Tuam, served as director of operations for those London championships. In January of this year he was appointed director of readiness for Doha by the IAAF, the governing body of world athletics, in part because of those concerns and also to ensure the place was at least ready.

Doha may be ready – with 2,043 athletes, from 210 participating countries, competing over the 10 days of competition – and even if the 40,000-seater Khalifa International Stadium will be fully air-conditioned to deal with the stifling heat, there is no escaping the poor ticket sales. Only 80,000 had been pre-sold at the start of the week and the reasons go beyond a simple apathy towards the sport.

“The reality is we’re expecting about 20,000 in the stadium each night,” says O’Callaghan. “So this is obviously not London, where the average daily attendance was close to 70,000, and you couldn’t buy a ticket in the six months prior to the championships.

“But the stadium temperatures are fully controlled, at 24 degrees, and will be perfectly comfortable for the athletes and spectators. And Qatar have two gold medal chances, in the high jump (defending world champion Mutaz Barshim) and the 400m hurdles (Abderrahman Samba), where there’s also hope the world record set in 1992 might fall in that event.

“All the world’s top athletes are here, one quarter of the world’s top 10 lists are under 23, it’s the biggest sporting event this year and the event presentation will also be something different, something very special, with lots of new innovations.

“There is a programme to bring in school children, but that happens at every single sporting event I’ve ever worked on, obviously to engage the young population, and to create some kind of legacy. There are also some 120 communities in Doha, and the organisers have engaged that section of the population too, no different to the Irish and other expats living in Japan or New Zealand during the Rugby World Cups.”

Another big part of the challenge is the economic blockade on Qatar, since 2014, from four of its neighbouring countries; they’re effectively trying to ‘starve’ Qatar out of it, and that’s had a major economic impact on the country.

There is also the legacy of Lamine Diack. Doha was awarded these championships back in 2014, ahead of Barcelona and Eugene (who did get the 2021 championships), under then IAAF president Lamine Diack, the Senegalese businessman who has since been ordered to stand trial on charges of corruption and money laundering, following a four-year investigation in France into doping cover-ups, extortion and bribe-taking in world athletics.

The blockade on Qatar is now entering its third year as neighbouring Arab countries and their allies continue to accuse the peninsula of a number of things, including hostile reporting by Qatar-based Al Jazeera TV station, interference in internal political affairs, and support for terrorism.

The diplomatic crisis began in June 2017 when Bahrain, Saudi Arabia, the United Arab Emirates (UAE) and Egypt, supported by other countries, including Mauritania and Yemen, cut or downgraded diplomatic ties with Doha, also closing their airspace, borders and markets to Doha. The dispute hit new heights in late 2018, when Saudi Arabia began digging a 37-mile-long canal along the border, effectively turning Qatar into an island.

“Since Doha were awarded these championships in 2014, we knew there would be challenges as there are with every major sporting event. No one knew of the blockade at that stage, and I think it might be the same come the World Cup in 2022.

“To be fair, Seb Coe [current IAAF president] has often stood up in congresses and told people that we are a global sport, we should be bringing the sport to other regions, and everyone agrees. Then when you do it, people are quick to criticise. Ultimately it’s about spreading the sport as far and wide as possible.”