England on verge of unprecedented 5-0 whitewash of Australia 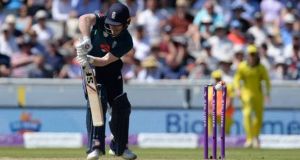 Eoin Morgan of England is bowled during the fifth International match between England and Australia at Old Trafford. Photograph: Getty Images

England are on the verge of an unprecedented 5-0 whitewash of Australia after the tourists descended to a manic 205 all out in only 34.4 overs at Old Trafford.

Moeen Ali (four for 46) and then one-day international debutant Sam Curran – both with two wickets in three balls – stopped Australia in their tracks after they twice hinted at a more substantial total, having won the toss in glorious conditions and on a very good batting surface. Travis Head (56) hit his third successive half-century, but got out frustratingly soon afterwards for the third time too, and D’Arcy Short was left unbeaten three runs short of his maiden ODI 50.

Before then Australia had faltered from 60 for none in little more than six overs to 100 for five – and they stumbled a second time after Short shared a stand of 59 with Alex Carey.

Head and Aaron Finch hit Curran out of the attack in an early onslaught which threatened to put unaccustomed pressure on the England bowlers, only for the introduction of Moeen to break the opening stand. Finch edged an attempted pull down on to his leg-stump, and then Marcus Stoinis mis-swept Moeen to short fine-leg for a second-ball duck.

Hapless Australia repeatedly made much of their of their own trouble thereafter, captain Tim Paine one of two to run himself out and Ashton Agar becoming Curran’s second victim when he played no shot to a straight ball which bowled him off and middle-stump.