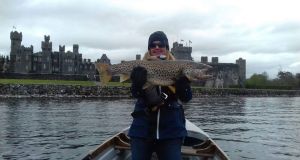 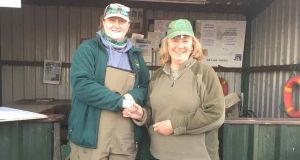 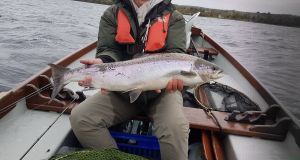 The Irish Ladies Flyfishing Association (ILFA) commenced their season recently with a trial on Lough Lene in Co Westmeath, the first of four to select an Irish team to fish in the home international championships in Wales in 2018.

A great day’s fishing was had by the 10 hardy ladies who braved the elements with lures and wet flies responsible for a terrific catch throughout the catch-and-release competition.

The second trial is scheduled for Sunday, May 14th, on Loughmacrory Lake, Co Tyrone.

This year’s home international will take place on Lough Melvin, fishing out from Garrison, Co Fermanagh, on Thursday, June 15th, with Julie Gerry as captain for the sixth time.

Soon after casting her line she hooked into the fish on an Octopus trout fly. Shaking with excitement, she landed the bar of silver and following some pictures by husband Mark, returned the hen salmon safely to the water to swim another day.

This was the first salmon to be caught on the fly on Melvin so far this season. Well done Liz!

Rod Robinson, spokesman for WLRT, said: “Waterville is a popular destination for anglers and this research shows the huge economic contribution they make to Waterville and the potential opportunity which exists for the community.”

Suzanne Campion of Inland Fisheries Ireland, added: “We note the research once more confirms that angling visitors spend more than non-angling tourists and that they visit outside of the traditional tourist season, supporting local businesses and jobs while doing so.”

Basil Shields from Ardnasillagh Lodge, Oughterard, said it was a quieter week at the lodge, however those who did venture out and found success were Peter Boyle and Mark Mulligan with four fish and Joe Murray had one of 1.25kg. Raymond Lee had two on wet olives for his day’s fishing.

Mark Colton and Mark Regan fished Birchall on Wednesday and landed five fish, best 1.47kg. Then on Saturday, Padraig Fahy and Joe Creane had seven fish in the same area.

On the Headford side at Greenfields, Northern anglers Freddy Steele and John Deery had two fish, both about 1kg.