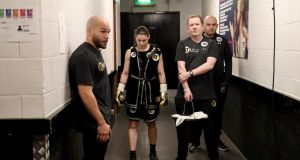 Katie Taylor will compete for her first professional belt at the end of the month in Wembley. Photograph: Inpho

Katie Taylor will face Nina Meinke in an eliminator for the WBA World Lightweight title on April 29th at Wembley Stadium.

Multiple amateur world champion Taylor has taken to the paid ranks in style since her debut in November, racing to 4-0 with two wins inside the distance and wowing crowds on huge fight nights in London and Manchester.

The 30-year-old will support heavyweight Anthony Joshua for the second time in her pro career and can land her first pro title with the WBA Inter-Continental strap up for grabs.

Meinke claimed her first silverware in her last fight when she beat Hasna Tukic in one round in March to pick up the IBF Youth Super-Featherweight title.

The 23-year old German, trained by former World champion Sven Ottke, is no stranger to the UK having boxed out of the Westway ABC in Scarborough as a teenager.

Taylor’s addition to the historic night sees her become the fourth Olympic gold medal winner on the card, joining fellow London 2012 winners Joshua and Luke Campbell, while Klitschko claimed gold in the Atlanta games in 1996.

“It’s a massive fight for me on a massive night of boxing,” said Taylor. “I’ve only been a professional for five months and already been lucky enough to box on some huge events but Wembley Stadium on the Joshua - Klitschko card is going to be something else again.

“I’ve watched Meinke and she’s a very strong opponent, “ added the Bray Olympic champion. “She’s unbeaten so it’s a step up for me and I’m sure she’ll be very confident. It’s obviously a massive opportunity for both of us being a world title eliminator and it’s my first scheduled 10 round fight so I’m relishing the challenge.

“I’ve been working very hard out here in Connecticut in training camp so I’ll be in great shape come fight night and I’m just really looking forward to it now and being part of such a historic event.”

“This is a huge step up for Katie on a massive night of boxing,” said promoter Eddie Hearn.

“No disrespect to her previous opponents but Meinke is on another level and has operated and been victorious on the big stage. In just four fights, Katie has established herself as the most exciting female fighter on the planet but now we get the chance to see if she is ready for the world stage.”

Taylor’s clash with Meinke is part of a historic night of action on the sold-out blockbuster battle between IBF king Joshua and former lineal World ruler Klitschko, with the WBA and IBO straps also up for grabs, while former World Super-Bantamweight king Scott Quigg continues his quest to become a two-weight champion by facing Viorel Simion at Featherweight, Campbell and Perez clash for the number one spot in the WBA, and Okolie, Cordina and Kelly will draw lots to see who kicks off the historic night.