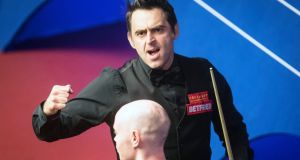 Ronnie O’Sullivan made a winning start to his 25th Crucible campaign as he saw off Gary Wilson at the World Championship.

The reigning Masters champion had two centuries and eight further breaks of above 50 in a 10-7 victory, setting up a shot at Shaun Murphy or Yan Bingtao in the second round.

Wallsend cueman Wilson was making his Crucible debut, and the 31-year-old former taxi driver gave an impressive account of himself. Two sparkling centuries on Sunday afternoon followed the eight tons he made in three qualifying matches which included a 147 maximum break.

But there was no denying five-time champion O’Sullivan, who last won the world title four years ago and punched the air in delight at getting across the line.

Resuming 5-4 behind, Wilson looked set to immediately level the match, but broke down on 50 when among the balls. Moments later, a spectator in the second row, close to the players, lurched out of an ill-timed afternoon nap and loudly said: “Oh f****** hell, excuse me.”

The man looked unwell and almost fell asleep again as referee Brendan Moore summoned stewards to usher him out of the arena, with play paused.

O’Sullivan, from 54 points behind, burrowed his way back into the frame. Helped by Wilson hitting the pink four times when put in a devilish snooker on the yellow, O’Sullivan went 6-4 ahead.

The players then traded fluent centuries, with 100 from Wilson followed by a total clearance of 124 from O’Sullivan, and the contest looked as good as over when a break of 74 from the crowd favourite carried him three clear.

Wilson could only watch as O’Sullivan powered to a rapid 83 to lead 9-5 and, despite trimming the deficit, it had grown too wide. The Newcastle United supporter enjoyed the 103 break that cut the gap to two frames, but less so the response from his opponent as O’Sullivan finished clinically with a 90 break.