America at Large: Basketball legends rebound to play in BIG3 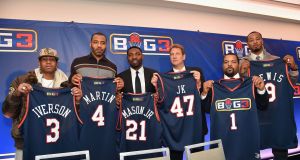 BIG3: In a league of thier own.

America’s newest professional league announced the schedule for its inaugural 10-week season last Monday and some of the outlandish team names offered evidence this is going to be a rather unconventional affair.

Among the outfits competing in the BIG3, a 3 on 3 version of basketball played on half-courts, are squads called 3’s Company, Three-Headed Monsters, Killer 3s, Ghost Ballers, and Ball Hogs. Those monikers give off the definite vibe of fantasy sports and that’s probably fitting because it’s kind of what everybody involved is going for.

The rather zany rules emphasize that much. Half-time will be reached when one side reaches 30, nobody can foul out, and shots from a certain distance will be worth four points. The winner is the first to get to 60 while leading by at least four. If that sounds like an improvised format worked out on the back of a beer mat late at night, this is actually a serious business. An attempt to tap into the enduring appetite for the most beloved playground version of the sport, it also represents a chance to offer iconic players the opportunity to prolong their careers. At least that’s how they are selling it.

“After Kobe [Bryant] retired, I was thinking about 3-on-3 basketball on another level, but when Kobe retired . . . I’m sick of it,” said Ice Cube, a co-founder of BIG3. “I seen Dr J [Julius Erving] go, I seen Kareem [Abdul-Jabbar] go, I seen Magic [Johnson] go, Shaq, Kareem, Kobe. I think those dudes left too soon. I think they still had game, they just couldn’t play 82 games. They just couldn’t play back-to-backs, three games in four nights. So we was like, let’s create a league where they can play again, and 3-on-3 basketball is actually the most competitive form of basketball played in the world.”

Plenty of others have bought into Cube’s fanciful notion. Allen Iverson and Chauncey Billups head up the list of recently-retired Hall of Famers lured back to the court and the roster of coaches includes Dr J Clyde Drexler and Gary Payton, names that will resonate with older NBA fans. Whether enough of them will be attracted by the concept remains to be seen but, for now, that Fox Sports have bought the television rights to the enterprise indicates a growing belief there may well be a serious market out there for this stuff.

For Ice Cube (real name O’Shea Jackson), it’s merely the latest twist in a rather remarkable career. As a member of NWA (Niggaz with Attitude) in South Central LA, he gained critical acclaim and battled accusations of misogyny, racism and anti-Semitism for rapping about socio-cultural issues affecting his community. He embraced the Nation of Islam, turned his hand to acting, and pieced together an extensive filmography that includes several writer and producer credits and a cameo on Sesame Street. The kind of eclectic resume that impresses even NBA legends.

“When I got the call, it was a no-brainer,” said Iverson who will captain 3’s Company. “It’s Ice Cube. It’s O’Shea. You don’t turn that down. That’s success looking right into your eyes. I just wanted to be a part of it, and I hope me being a part of it makes it a success, like everything that he’s been doing in his life.”

Aside from marquee names perhaps attracted by the prospect of revenue sharing, BIG3 has several factors working in its favour, most notably that it comes on stream just after the conclusion of the NBA finals in June, a time when the most devoted fans are traditionally Jonesing for a fix. Not to mention it’s a fallow period too for cavernous indoor arenas, desperate for revenue.

A schedule that involves players barnstorming their way across 10 cities over the course of the summer makes smart commercial sense as well, their arrival in each town for a weekend will be a major event, especially since Ice Cube has promised each slate of fixtures will come attended by all manner of musical entertainment. With cheapest tickets for opening night in Brooklyn starting at $27, they are also pricing themselves competitively.

Do not underestimate the market here for sports-related gimmickry either. This is a country where, bizarrely, NBC and CBS often show live broadcasts of celebrity golf tournaments involving actors and NFL quarterbacks putting badly. Before the All-Star game in every major code, fans lap up trick shot competitions and home run hitting contests, regarding these childish novelties as an intrinsic part of the culture. Against that background, affording them the opportunity to watch genuine greats playing meaningful pick-up games amid some inevitable razzmatazz seems like a no-brainer.

Of course, nothing is guaranteed. In 2001, NBC and the WWE combined their considerable forces to establish the XFL, a professional grid-iron league to run in the spring when NFL devotees had nothing to watch. Styling itself, with all the usual Vince McMahon hyperbole, as an edgier alternative version of the country’s national obsession, it lasted just one season. Turns out, despite all the hoopla, fans didn’t want to watch football played badly no matter the time of the year and the whole thing was a $100m mistake.

Ice Cube insists this is a different proposition. And, given that he once rapped about a desire to kill Al Davis, then owner of the Oakland Raiders, his favourite NFL team, we’ll take him at his word.