Ireland announce squad for historic one day series against England 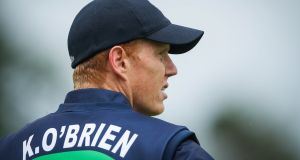 Kevin O’Brien has been declared fit to take part in Ireland’s one day series against England in May. Photo: Inpho

Kevin O’Brien and Paul Stirling have been declared fit to face England in two ODIs at Bristol and Lord’s next month and have been named in a 14-man Ireland squad for the “historic” games on May 5th and May 7th.

O’Brien, who famously scored the fastest century in World Cup history against England in 2011, has recovered from a hamstring injury that saw him miss three of the five ODI’s against Afghanistan last month.

There was a further boost with Stirling declaring his availability following a finger injury sustained during the ICC InterContinental Cup game against Afghanistan at the end of the same tour.

However, their inclusion is tempered by the news that Boyd Rankin and Jacob Mulder will miss the games – both are suffering back problems.

“The opportunity to play England in England and in particular at Lord’s is not only historic, but a great tribute to Irish cricket and its journey,” said Ireland head coach John Bracewell.

“The 14 selected give us the best balance available to take on England in early May. The conditions will be as different as they could be from those we experienced against Afghanistan in India – as will the composition of the two bowling attacks, with pace being key.

“It’ll be another great challenge for our players, but one everyone associated with Irish cricket can’t wait for,” added Bracewelhe added.

The match at Bristol is a return to Bracewell’s former stomping ground, where he won six trophies in two spells as coach, over 10 years.

“For me it will be great to return to my old county in Bristol, to a city and team I hold great memories for and people I like very much,” he said.

Kevin O’Brien and William Porterfield have both played for Gloucestershire too, and the skipper hopes that there will be a sizeable support for the Boys In Green at both venues, with English-based Irish fans turning out in force.

“I’ve no doubt there will be a massive support at both venues given both the number of Irish around Bristol and in London, never mind the amount of people travelling over,” said Porterfield. “I’ve happy memories of my time at Gloucestershire who gave me my break in county cricket and I’ll always be grateful to them for that.

“There’s no doubt that the games against England will be tough but we’ve got some hard cricket under our belts this past few months and that will stand us in good stead for the challenges that await.

“We’re all determined to do well, and while we’ll certainly respect England, there’s absolutely no fear factor there.

“It helps that there are seven survivors from our World Cup win against them, so it shows just how much experience there is in the camp, as well as a number of younger players who have the hunger to make history again.”

Porterfield admits the experience of leading an Irish side out at Lord’s will “be a bit special” and says that it’ll be a marvellous place to showcase the very best of Irish cricket.

“It’ll be a great honour and a special day for all in Irish cricket. I smile when I think that both myself and Eoin (Morgan) played for Ireland Under 13’s together and here we will be captaining both sides in a one-day international at Lord’s. It shows just how far Irish cricket has come in a short space of time, but we still have more to travel and offer. Hopefully it won’t be too long until we play a Test match at Lord’s.”

Lord’s holds a special place in Irish cricketing history, the scene of their first Gillette Cup match back in 1980, where they gave Middlesex – a team containing nine Test players, Ian Gould and South African Vince van der Bijl were the exceptions – a real scare, before losing by five wickets.

That game brought Dermott Monteith to the attention of Middlesex, and the Lisburn man won a County Championship medal with them in 1982 when he deputised for John Emburey and Phil Edmonds who were on Test duty with England. Ed Joyce played with the county with great distinction, while Andrew Balbirnie has also featured as well as current internationals Tim Murtagh and Paul Stirling.

Ireland fans will be hoping that May 7th 2017 will be the latest cricket chapter written into the nation’s cricketing folklore.

The Ireland squad for the tri-series with New Zealand and Bangladesh will be selected after the England games.