‘You don’t want to let go, knowing that wheel in front of you makes for 30% less effort’ 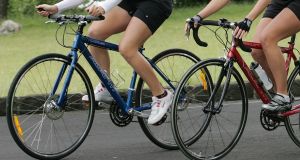 Sonia O’Sullivan: “We ride along in pairs, holding on to that wheel in front.” Photograph: Getty Images

The Easter Holidays always creates a buzz of activity down along the Surf Coast, people out and eager to make the most of the weather before the chill of the Australian wintertime.

I find when in holiday mode like that the mind can play tricks. You slow down, take it easy, but also feel some urge to make use of the time. Which is exactly how I felt dashing madly out the door to meet up with the local peloton.

Scrambling around for all my bits – helmet, shoes, gloves, drink, phone, watch, banana – the time was ticking by fast. I started to wonder . . . why do I do this?

There was no time to find an answer, unless I wanted to be left behind riding along by myself.

Then the last-minute check of the bike tyres, another minute pumping up to where I like them. Why do I always forget and not check earlier?

Once the shoes are on there’s no going back (no climbing stairs in cycling shoes). And the arm warmers? Left behind. I’ll just have to deal with the early morning chill in the air and have faith that the sun will be out soon.

Better to start out cold and warm up, than start out too warm. Or should that be the other way round?

At least that’s what I keep telling myself when the elastic starts to stretch.

My earlier thoughts and doubts are soon forgotten as my heart rate increases, my muscles warm up and I start to drift away to that place where the physical effort calms the mind.

Maybe it’s the anticipation of a hard effort, knowing there is every chance I will be outside my comfort zone, that brings about the voices in my head. It would be so much easier to sit down with a good book, a coffee, watch the sunrise. But would I pay for it all day long, with the guilty conscience of what might have been?

That satisfaction you get when you arrive back never disappoints, a positive and energising answer to those earlier questions, and you wonder instead why you have those doubts and moments of procrastination.

But is there something else motivating us these days, that near instant moment of gratification when you can look back on a map and profile of your most recent activity as soon as you walk in the door?

I’m probably at the lower end of the technology that athletes now use to recall and analyse their most recent training activity. The speed, distance, profile of the uphill, the downhill, even a quick reminder if you were working hard or just spinning around, all confirmed with the collection of trophies and crowns that have been accumulated over the past few hours if you happen to be on the Strava App.

It’s no harm and I certainly enjoy having a look back on the app after a swim, to see if I managed to keep a straight line between points or was weaving all over the ocean.

Like last year during the Jailbreak Triathlon in Cobh it was doubly rewarding to know I’d managed to swim from Spike Island to Cobh in a straight line and short distance, compared to others that I spoke to after, when comparing notes.

The speed of the interaction from followers all over the world, sometimes before I’ve even taken my shoes off, is actually quite amusing

Still, I don’t take the tracking apps, such as Garmin and Strava, too seriously. It’s nice to get some feedback, particularly after a bike ride or swim, where the chances of personal best are so much greater than any mark I would make running around the parks and trails these days. All I can hope for there is maybe one day I might just lace up my shoes and head out for a longer run than ever before.

Having some instant feedback is an important part of sport, to spur you on, give you the encouragement to keep going towards any short and long-term goals.

When I used to train from my London base in Teddington, Tuesday night was always the most important training session. It was the one night I met my coach Alan Storey at the track, and the personal interaction gave so much more than any recording or tracking device.

We never spoke too much during the session, but there was always a review after. This was often over the phone as I was trying to pass the time recovering in the ice bath, while getting as much positive feedback as possible from Alan, some guidance for the next few days of training.

The worry is there seems to be more reliance now on the data and the numbers and the figures on our watches and phones. The eye of a coach sees much more of the bigger picture, helps to put the numbers in perspective, and to use them as a confidence boosting guide. But also in knowing when to leave the watch at home and go for an easy recovery run.

One of my favourite comments from Alan was: “On Sunday, a long run, as slow as you like.” That usually indicated that all the hard work was done for the week and now was the time to contain things and absorb the training.

All this technology is great for the fitness enthusiasts who like to keep a check on things and be reassured that the time spent training is worthwhile. It’s also useful for the retired athletes, who still need that bit of feedback, a reminder of their daily life as an elite athlete.

It helps when there is a time and a place to meet up, and knowing there’ll be that bit of feedback at the end

I know there are days when I’m getting ready to head out on a bike ride and with all the time it takes you could nearly talk yourself out of it. It helps when there is a time and a place to meet up, and knowing there’ll be that bit of feedback at the end

We all know that just like planes and trains, groups of bike riders roll out at the fixed time and wait for no man or woman who might be just one minute late.

Like on those days you find yourself chasing down the road, praying and hoping the traffic lights might just be on your side today. Because stopping at traffic lights is the one thing that the tracking app doesn’t seem to take into account as the clock keeps ticking on while you wait for the change to green. And then it’s all go, go, go on the restart.