Ronnie O’Sullivan claims he has been ‘bullied’ by snooker chiefs 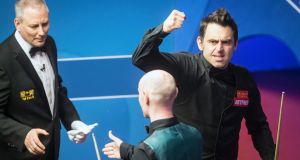 Ronnie O’Sullivan accused the snooker authorities of bullying and intimidating him in a breathtaking outburst at the Betfred World Championship.

The 41-year-old five-time Crucible champion pointed the finger at World Snooker chairman Barry Hearn and his board.

And he revealed the extent of his distress at receiving a letter from disciplinary chiefs after he criticised a referee and photographer during January’s Masters.

O’Sullivan has deliberately and repeatedly given one-word answers to questions he has faced after matches, while in an ITV interview at the World Grand Prix in February he gave a series of responses in a robotic voice.

This time O’Sullivan struck back, and said: “I phoned Barry up four weeks ago and I said, ‘Barry, I’m done with all you and your board of people’.

“And I’ve got a very good friend of mind who said, ‘Just let my lawyers deal with it’. I won’t get involved with it because I’m not being bullied, I’m not having people doing that to me ever again.

“I’m just fortunate I’ve got a very good friend who’s got very good lawyers and they’ve got my back. I just want to play and have fun.

“I like Barry, but I’m not being intimidated or bullied any more.”

O’Sullivan was speaking after making a winning start to his 25th Crucible campaign as he saw off Wallsend’s Gary Wilson 10-7.

The Masters champion had two centuries and eight further breaks of above 50 against the debutant, but he is reluctant to open up about his matches, and revealed the reason why that is his stance.

“It’s important that I keep focused, keep professional, keep myself out of trouble and just try to come and do a job,” O’Sullivan said. “It’s all about business.

“I have no problem with the press, but sometimes I say things I shouldn’t say and get myself in hot bother and I get a letter through saying I need to respond in 14 days, a day before a tournament and it’s kind of messed up my last three or four tournaments.”

O’Sullivan has been out of sorts ever since his Masters triumph at Alexandra Palace, failing to win back-to-back matches at the five events he has played since that tournament and his trip to Sheffield.

He blames the snooker authorities – World Snooker and the World Professional Billiards and Snooker Association – saying they have put him in the wrong frame of mind to play.

O’Sullivan was unhappy with the performance of referee Terry Camilleri in his Masters semi-final win over Marco Fu, and said a press photographer had been “a f*****g nightmare” during the match.

He says he was pushed over the edge by the reaction from World Snooker, having been incensed by previous disciplinary cases opened against him.

“I’ve had it for five, six, seven years, and I’m just done with it,” O’Sullivan added.

“They’ve pushed me a little bit too far and, if I didn’t have good lawyers to deal with it, I’d probably walk away because I’m too old to be dealing with things like that.

“It’s not that important. I could go and do Big Brother, I could go and do I’m A Celebrity Get Me Out Of Here, I could have a great life doing other stuff. This is something I do for love, but I’m not going to do it and have people trying to intimidate me and bully me. I’m just not having it.

“I’ve given 25 years of service to this game and I think I’ve given enough. Drop me out, I don’t need you, you probably don’t need me.

“I just want to enjoy my life and I’m not putting up with someone thinking they can threaten and bully me. We need to be sensible. They can maybe relax and stop being so precious about everything. It’s very unsettling for me.”