Aaron Hernandez’s death shows that celebrities are strangers to us 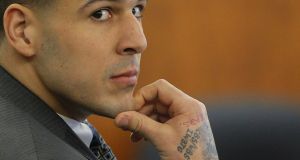 On a gloomy late spring morning in 2013, Aaron Hernandez gave his final football interview. It came at the end of a mini-camp practice on the day the New England Patriots signed his college compatriot quarterback Tim Tebow. And Tebow’s arrival had caused an immense stir. As the workout ended and Hernandez walked off the practice fields behind Gillette Stadium, he was engulfed by a throng of reporters.

Hernandez seemed polite enough as he stood holding his silver Patriots helmet, answering questions about Tebow. But he seemed impatient. His responses were short, and strangely devoid of insight about a quarterback who had helped make him a star at the University of Florida. His voice lacked warmth. He struck me that day as a man detached from the team on the field beside him.

“Great team-mate, great leader,” he said with a shrug when asked about Tebow. “That’s all you can say.”

When someone asked about the “distraction” that came with the mania surrounding Tebow at the time, he shrugged again, and mumbled: “The media is going to be around.”

Then he was gone.

Six days later Odin Lloyd, the man Hernandez would be convicted of murdering, was found dead in an industrial area a few miles away. On Wednesday, Hernandez killed himself in his prison cell.

I’ve thought a lot about that 2013 day in the years since, trying to connect the star player rushing through a group interview to the brutal killing of Lloyd, who was supposed to have been one of Hernandez’s closest friends. It’s easy enough to think that in killing another person in a grubby murder a talented player with a $40m contract and a mansion puts everything at risk. But such views are mostly constructed on snap judgments made in interview circles on the edge of a field or inside a locker room. They have all the intimacy of a bakery line, where you take a number and wait for your order. They tell us little about the celebrities at the end of the microphone.

Who knows what swirled though Hernandez’s mind that morning, just six days before he would shoot Lloyd? Who knows, too, what he was thinking last Friday, when he was acquitted of a double murder in 2012, five days before he was found dead in his cell at the maximum security prison in Shirley, Massachusetts, where he was serving a life sentence for Lloyd’s killing. Hernandez smiled at the not guilty verdict last Friday. He smiled a lot through his trial, blowing kisses to his longtime girlfriend and their four-year-old daughter. He cracked jokes. He seemed to the world like a man at ease.

Who really understands these athletes that we judge in five-minute soundbites? Patriots owner Robert Kraft apparently never dreamed he was buying a killer when he gave Hernandez that five-year, $40m contract extension just 10 months before Lloyd’s murder. He praised Hernandez as “a first class guy”, a kid who listened to the wrong people back home in Bristol, Connecticut, but who had grown up to be a man at 23. Who knows? Maybe he never knew himself.

“You can’t come here and act reckless and do your own stuff,” Hernandez said when Kraft gave him the $40m. “I might have acted the way I wanted to act [in the past]but you get changed by [coach]Bill Belichick’s way. You get changed by the Patriots’ way. Now that I’m a Patriot, I have to start living like one and making the right decisions for them.”

Once, Hernandez was one of those great American success stories: a talented football player at Bristol Central high school who had adored his father, Dennis – a former football star at the University of Connecticut who died during hernia surgery when Aaron was a teenager. After Dennis’s death, Hernandez said he started using drugs, and began hanging out with people his father was apparently trying to shield him from. Florida supposedly gave him a new start, and outwardly he embraced the chance the Patriots gave him, combining with Rob Gronkowski to give the Patriots the best tight-end combination in the NFL. While reports of positive drug tests and rumors of off-field incidents at Florida dropped him to the fourth round of the 2009 NFL draft, he also received a perfect score in a pre-draft psychological, according to a 2013 report from Fox Sports’ Alex Marvez. He was never easy to read.

Perhaps everyone believed the best because he was an exceptional athlete. Perhaps they only looked for the good because he had a smile that could disarm doubts. In the end, everyone kept getting him wrong.

Hernandez’s great American success story was long over by Wednesday morning. Though his attorney Jose Baez had talked, after Hernandez’s acquittal last week, of appealing against the Lloyd conviction, Hernandez’s money was gone. Such a maneuver was a long shot, one he could no longer afford. He died alone, with few supporters or believers. He was no longer Aaron Hernandez the Super Bowl tight end, the star of Boston’s nightclubs or even the celebrity defendant. He was just a 27-year-old convicted killer doomed to live his life in a prison cell.

And so, on the day the team that has long moved on from him was scheduled to celebrate another Super Bowl victory at the White House, he killed himself. As was the case with everything else about Aaron Hernandez, no one saw it coming.