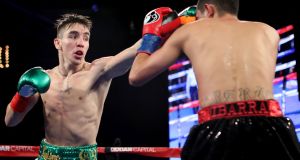 Michael Conlan is set for his second professional headline fight in Chicago on May 26th.

No opponent has been confirmed yet but, according to ESPN, Conlan will be in the main event of the UniMás-televised card. The show will be broadcast to a large Spanish-speaking population in America, and may increase the fighter’s popularity Stateside.

May’s bout could begin a busy Summer for the Belfast fighter. Earlier this week, he revealed on Twitter that there is a “likely” chance he could be on the undercard of Manny Pacquiao’s fight against Jeff Horn in Brisbane on July 2nd.

Limerick set up Waterford final; Cavani completes Man United comeback 07:59
It’s shocking how men have driven women away from exercising in public 06:00
Dogged Armagh fail to stop Dublin claiming place in final 06:00
Ken Early: Maradona’s wonder goal a monument to lost freedom 06:00
‘It wasn’t down to anything dramatic I said . . . It was down to the players’ 06:00