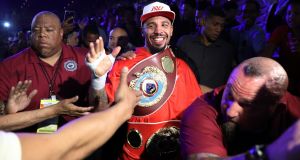 Andre Ward celebrates after his light heavyweight championship bout against Sergey Kovalev in Las Vegas in June. The 33-year-old has announced his retirement from boxing. Photograph: Christian Petersen/Getty Images

Andre Ward, the unified light heavyweight champion widely recognised as the world’s top pound-for-pound boxer, announced his retirement from the sport on Thursday.

The Olympic champion attributed the physical rigours of the sport and waning desire to fight with his decision to walk away at the relatively young age of 33.

“I want to be clear – I am leaving because my body can no longer put up with the rigors of the sport and therefore my desire to fight is no longer there,” Ward said in a statement on his website. “If I cannot give my family, my team, and the fans everything that I have, then I should no longer be fighting.”

Ward (32-0, 16 KOs) was coming off an eighth-round knockout of Russia’s Sergey Kovalev in June, a rematch of their November bout which the American won by a controversial unanimous decision. Those pay-per-view fights came after a host of injuries and a promotional spat that conspired to limit him to four fights in the previous 50 months.

Previously, he had cleaned out the talent-stacked super middleweight division with a run of clinical victories over Mikkel Kessler, Allan Green, Sakio Bika, Arthur Abraham, Carl Froch and Chad Dawson.

He went 114-5 in an extraordinary amateur career that culminated with an Olympic gold medal at the Athens Games, which remains the last time an American has topped the podium in men’s boxing. The last time Ward lost a fight was against John Revish at the 1997 National Silver Gloves tournament in Baton Rouge when he was 13.

“I remember what that felt like, I remember who it was, I remember where it was, I remember how I felt coming home,” he recalled to the Guardian last year. “And I just never wanted to feel like that again. I made up my mind that it was never going to happen again in terms of what I can control. That’s what drives me. I don’t know if it’s a fear of failure, but I’ve always had it.

“That’s why I train the way that I train. I don’t like to lose. God forbid if that ever happens, it’s not going to be because I wasn’t ready.”

Ward said last month his TV contract with HBO, for whom he’d fought six of his last seven fights, had expired.

“Andre Ward ends his boxing career as he only knew how to live it – as a champion at the top,” HBO boxing czar Peter Nelson said in a statement. “To watch Ward was to marvel at constant mastery of craft in the ring, to say nothing of his being the consummate role model outside it. The Hall of Fame will be lucky to have him.”