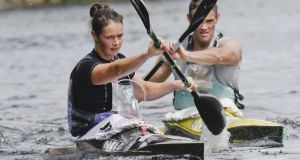 Jenny Egan and Peter Egan at the Irish Marathon Championships this year. They will team up in a mixed K2 at the Liffey Descent on Saturday. Photograph: Mick Feeney.

The Liffey Descent, the highlight of the domestic calendar of Irish canoeing, will boast some novel features this Saturday.

The race, which has an entry of over 500 competitors, will feature GPS tracking of the top boats. Followers will be able to view their progress on an online map of the 30km course from Straffan to Islandbridge. The link will be on the Canoeing Ireland Facebook page.

Spectators at the event, which runs from Straffan in Kildare to Islandbridge in Dublin, will also see a first outing in the race for the mixed K2 (racing kayak) of Jenny Egan and her brother Peter Egan. “We’ve always wanted to do it, but the circumstances were never right before,” Jenny said.

Both have just returned from South Africa, where they competed in the World Marathon Championships. Jenny Egan took a bronze medal. She says she has recovered from a bug which affected her after the championships.

The fastest crew will almost certainly come from the men’s K2 class. Luis Amado and Miguel Llorens from Spain look a good bet here, though the local knowledge of Barry Watkins and partner Jon Simmons makes them serious contenders.

There are some strong British crews, and former Surfski world champion Sean Rice, a South African, teams up with Tom Sharpe of Britain.

Ireland international Tom Brennan will hope to defend his K1 title, though he could come under pressure from Ronan Foley, who was the fifth fastest junior at the World Championships.

The Liffey Descent entry is down on its glory days but the new race co-ordinator, Shane Cronin, sees progress being made. “We have world-class competitors involved, and there could be very fast times. I think this could be one of the best races in recent times.”