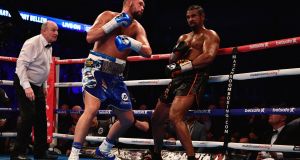 David Haye and Tony Bellew have agreed terms for a heavyweight rematch at London’s 02 Arena on December 17th.

Neither fighter has yet signed the contract for a fight that unusually has been scheduled for a Sunday, but both are satisfied with the terms involved and an announcement is expected next week.

The 36-year-old Haye earlier this week wrote on social media: “It’s taken months of negotiating but teams have finally agreed all terms for Haye-Bellew II. Will Bellew put pen to paper?”

Bellew (34) responded: “I don’t really feel like talking to be honest. I oblige you, David Haye, happy? Now leave me alone with my family please. I’ll see you soon enough.”

It is understood Bellew will again earn the highest purse of his career, having done so for their dramatic fight in March which represented his first fight at heavyweight and which he unexpectedly won.

Haye ruptured his Achilles in the sixth round, before which the fight had been largely competitive, but struggled to maintain his balance thereafter and survive until the 11th round stoppage, when then-trainer Shane McGuigan threw in the towel.

He has since replaced McGuigan with Cuba’s Ismael Salas and recovered his fitness, and even promotes a Hayemaker Ringstar bill at London’s Indigo at the 02 on October 20th.

Bellew’s trainer Dave Coldwell had wanted his fighter to retire after a win that remains considered the finest of his career, but a rematch has proved too lucrative an option to turn down.

Haye similarly needs to rebuild his reputation to pursue his plan of challenging Anthony Joshua.

The rivals remain on bad terms. In June Haye was fined £25,000 by the British Boxing Board of Control for his behaviour in the build-up to March’s fight, in which he repeatedly made graphic threats that he admitted brought the sport into disrepute.