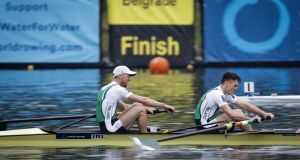 Ireland’s Mark O’Donovan and Shane O’Driscoll have beaten all before them in the lightweight fours. Photograph: Srdjan Stevanovic/Inpho

The news that Gary O’Donovan would not compete at the World Rowing Championships overshadowed the announcement of a team which is line to win multiple medals – two, quite probably, gold – at the event, which begins on Sunday week (September 24th) in Florida.

The final entries for the championships have been named and the lightweight pair of Shane O’Driscoll and Mark O’Donovan, who have beaten all comers this season, should be favourites to prevail again. While Paul O’Donovan is set to take on 30 other competitors in the lightweight single sculls, he will also be the favourite to defend the title he won last year.

Young guns such as Uncas Batista, the newly-crowned world under-23 champion from Brazil, and top newcomer Artur Mikolajczewski of Poland hope to dethrone O’Donovan. But the Skibbereen man performed the extraordinary feat of keeping his focus after the Olympic Games last season as he travelled directly from Rio de Janeiro to Rotterdam to take the title. He should also be able to refocus after his brother’s illness forced the withdrawal of the lightweight double from this Championships.

The story that Gary O’Donovan was to be replaced by Shane O’Driscoll in the lightweight double – used prominently in some national media, and still featured online – is simply wrong.

There were hopes through recent weeks that Gary might still be able to compete. He had been hit by the viral illness before he went out. He was still able to train, and flights and accommodation were booked for the World Championships. However, when he began to suffer again – sore throats, lack of energy – the decision had to be made. “Time ran out,” said Ireland coach Dominic Casey.

It is a mark of the O’Donovan brothers that Gary will go on to support Paul at the Championships, as he did last year. He has been named as first reserve and Casey says that if something happened to either O’Driscoll and Mark O’Donovan he might fill in.

Denise Walsh may be the most likely contender if Ireland are to take a third medal. There are 16 lightweight women’s single scullers entered, but perhaps nine who can harbour real hopes of mounting the podium. Walsh, who has silver medals from this year’s European Championships and the World Cup regatta in Belgrade, is amongst those.

Sanita Puspure is the one serious contender for an Olympic-class medal. The Ireland single sculler has had a season blighted by illness and by family bereavements, which involved her flying back and forwards to Latvia, where she grew up. Interestingly, multiple medallist Ekaterina Karsten has not entered.

The Ireland men’s and women’s pairs can hope at best for B Final places. Neither of the men’s crew have competed at international level as seniors.

The squad returns to Ireland this weekend and is set to fly to Florida on Monday.