Rowing: Ireland squad test waters in Florida as they wait on their own boats 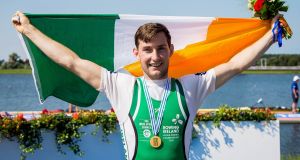 The Ireland team for the World Championships has been settling in at the course in Florida – albeit without the use of their own boats.

Hurricane Irma forced the ship carrying the equipment to divert to Houston in Texas, which had its own share of storm trouble recently, and team manager Susan Dunlea said she was expecting the boats to arrive in Sarasota-Bradenton later on Thursday.

A number of countries have had the same difficulty. Teams have been borrowing boats, and Dunlea said that all of her charges had tested the waters at the new course in central Florida.

The draw for the heats will be on Saturday afternoon local time and competition begins on Sunday and runs for a week.

The weather has been generally good, with bearable temperatures and heavy evening showers. However, the infrastructure around the Nathan Benderson course is only coming together fully now, as the organisers held off on projects until Hurricane Irma had passed.

“I hope we can improve on our record at last year’s World Championships,” Dunlea said. Ireland took one medal in Rotterdam in 2016 – Paul O’Donovan’s gold in the lightweight single sculls. O’Donovan is an odds-on bet to match that this time, and the lightweight pair of Shane O’Driscoll and Mark O’Donovan would be disappointed if they do not continue to exert the dominance they have shown right through the season.

RTÉ plans to provide TV coverage of the semi-finals and finals from Thursday afternoon through Sunday, October 1st. There will also be a highlights programme on Sunday night.

The Ireland coach, Dominic Casey, has been chosen as the Cork person of the month for September – it will certainly be a busy month for him. And hopefully a successful one.

The Get Going, Get Rowing programme will be available in Cork city and the Ballincollig/Coachford area from October. The initiative brings schoolgoers into the sport and has established bases in Leinster, Galway, Limerick and Skibbereen. It has been a very positive development for rowing. The new phase will be a joint scheme with Cork Sports Partnership.

Queen’s University Boat Club has landed a new sponsor. FinTrU is based in Belfast and employs over 200 people. It provides outsourcing for financial services companies.

On the wider rowing front, Fisa president Jean-Christophe has been elected to the International Olympic Committee. Two other prominent rowing advocates were also elected: former Fisa president Denis Oswald as a member of the IOC executive board and Anita DeFrantz as an IOC vice president.