Englishman’s hopes of a second term suffer an embarrassing defeat 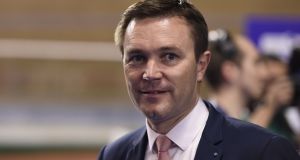 Frenchman David Lappartient has been voted in as the new UCI president, winning a vote against Britain’s Brian Cookson 37-8. Photograph: Nicolas Tucat/AFP/Getty Images

Brian Cookson’s reign as the UCI president came to a humiliating end as he garnered only eight of 45 possible votes in losing world cycling’s top job to the Frenchman David Lappartient. The contest in Bergen had been forecast to be on a knife edge. Instead, Cookson haemorrhaged support and suffered one of the widest election losses by a reigning head of any international sports federation.

The result also means that Cookson, who took over as the head of international cycling in September 2013 after 16 years in charge of British Cycling, becomes the first UCI president to serve only one term.

Afterwards Lappartient, the European Cycling Union president, vowed to rid the sport of the “corruption” that he said had left the UCI with a “disastrous reputation”.

The 44-year-old, who has boldly promised to ban the use of out-of-competition corticosteroids, which can allow riders to lose weight without the corresponding decline in power, as well as doing more to tackle technological fraud by the use of hidden engines in bikes, added: “It is a great responsibility and I will endeavour in the next four years to be worthy of such trust.”

Cookson, meanwhile, was left licking his wounds. In a speech to delegates before the vote, he promised to double the UCI’s investment in women’s cycling and appealed to delegates to be allowed to continue the work he had started. Yet he failed to win them over. Tellingly, reports suggest he did not get a single vote from the 15 European delegates.

Afterwards he fiercely defended his presidency, insisting he had lifted cycling out of the gutter during his reign and had changed UCI for the better since replacing the Irishman Pat McQuaid.

“The UCI I leave behind is unrecognisable from the organisation I took over in 2013 and I depart with my head held high,” he said. “Someone needed to stand up and take on the previous regime, who had dragged cycling into the gutter, and I leave the UCI knowing that I have delivered all the promises I made four years ago.”

Cookson said he was most proud of his work in promoting gender equality and supporting developing nations, which he claimed had “inspired and excited millions more around the world”. He added: “I am tremendously disappointed not to have been given a mandate to complete the work we began four years ago and I hope that David Lappartient will continue to move cycling in the right direction.”

Yet the flaws in the 66-year-old Briton’s candidacy were obvious, too. In 2013 he had run as the change candidate against McQuaid but this time round there was a lack of fresh ideas. Some at the UCI also felt his introverted style and lack of drive was not best suited to run a leading global sport, and he was not helped by the negative headlines surrounding bullying and discrimination that have dogged British Cycling, where he played such a central role. Cookson also faced criticism, especially on social media, for posting numerous selfies with riders.

When Lappartient had announced his intention to run in June, he said Cookson was a weak president who lacked “ambition” and “vision”. After his victory the Frenchman was more magnanimous, telling his rival he would always be welcome in the sport. “I imagine his disappointment because I know his interest in our sport that he practises regularly,” he added.

He also promised to get to work immediately and change the cycling for the better. “Change generates fear,” he said. “It’s normal. However, I would like to reconfirm to UCI employees that I know their value and professionalism, and we need your expertise and commitment to work with me in delivering this four-year plan. As of Tuesday, I will be at the UCI headquarters in Aigle to meet each and every one of you, and begin working on what I have been elected to do.”