In a sports-mad nation why is one in four Irish schoolchildren considered overweight? 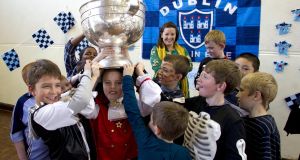 We were just a few weeks into First Year at De La Salle Churchtown when Jim Stynes walked into our classroom carrying the All-Ireland minor football trophy. It was 1984 and we were at that age and point in our lives where any distinct influence could and usually did have a lasting effect.

Jim instantly provided that, not only because he was already a giant of a man. He’d finished up at the school that summer and here he was back a few months later an All-Ireland winner, one of Dublin’s standout players at midfield alongside captain Paul Clarke. In that still entirely adolescent moment it seemed he opened up a world far beyond the gates of De La Salle.

It didn’t actually matter whether he’d won or lost. He’d played in Croke Park and was about to make a career out of sport. Two months later he replied to a local newspaper article looking for recruits to Melbourne Football Club, and the rest is Australian sporting history. His 244 consecutive games for Melbourne, between 1987 and 1998 are still an AFL record (which only ended after he broke his hand) and he is still the first and only non-Australian to win the Brownlow Medal. In 2012 he died from cancer, at 45, my age now exactly.

Fit and out of trouble

I remember all that because his younger brother Brian was in our class, and was equally sporty. We were labelled a rugby school but actually De La Salle didn’t care what sport you played as long as it helped keep you fit and out of trouble, preferably the latter. Especially when it came to PE.

For a double-class every Thursday morning it was survival of the fittest. We played all the so-called invasion games – rugby, football, basketball – and no prizes for guessing the first and last person picked. Brian was always the standout and it was no surprise when he followed his brother’s footsteps to Australia, and later returned to star on the Dublin senior All-Ireland winning team of 1995, alongside current manager Jim Gavin.

Around October or November our PE teacher Dick Ryan took us cross country running, and here’s where the tables were turned. I remember all that because that’s when running became my sport (and still is). Not because anyone forced it or because my dad ran in the Olympics, but because I enjoyed it, happened to be good at it, and yes because it opened up a world far beyond the gates of De La Salle.

There is a lot of talk these days about the lack of physical fitness among Irish schoolchildren, and you don’t need me to remind you just how scary the stats are.

It’s not just the shockingly low participation (80 per cent of primary schoolchildren are not getting the recommended at least one hour of physical activity per day), or that one-third are coming out of primary school unable to properly run, jump, throw or even catch a ball (according to a new research study carried out by DCU and the GAA).

For a self-proclaimed sporting mad nation, something doesn’t add up when one in four Irish schoolchildren is now considered to be overweight. The projections are even more scary, and according to some reports, our obesity levels will be hovering somewhere around 90 per cent of the population by 2030, the highest projected level in Europe.

Prof Niall Moyna, head of the school of health and human performance at DCU, wrote possibly the most important opinion piece on this subject in this newspaper on Monday, all pointing towards the poor allocation and practice of PE in Irish schools.

“The majority of children who are not involved in competitive sport leave school with little or no knowledge of how to design and monitor programs to maintain health-related fitness,” he wrote. “Furthermore they have little understanding of nutrition, stress management or the impact of alcohol, smoking or recreational drug use on their health. This is a curriculum that calls itself ‘physical education’ – and is falling well short of what it promises to do.”

With that he proposes basic yet urgent changes (primary schoolchildren should have three 15-minute periods of PE each day), while also encouraging the Government to consider including PE in the Leaving Cert curriculum, at least in part.

That was actually one of the pledges made by Leo Varadkar in his campaign for Taoiseach, and there’s been talk of making PE an optional Leaving Cert exam subject since the 1980s (an actual curriculum has been on the shelf since 2004); still various barriers and obstacles are put in the way, such as the lack of facilities, the need to ensure standardisation of the subject material, and the hiring of enough suitably qualified PE teachers.

In the meantime, a 2013 survey of 36 European Countries ranked Ireland third from the bottom with the 37 hours of PE a year at primary school (compared to 108 in France); at secondary school, it averages 45 hours a year (half of what students get in Portugal).

Last November, Minister for Sport Shane Ross opened the public consultation for a new National Sports Policy Framework, which also has the potential to improve the physical fitness of our schoolchildren, but it seems that’s still sitting on a shelf somewhere too.

There doesn’t appear to be much hope of increasing those PE hours in the short term, unless Varadkar is serious about his pledge, which makes those classroom visits by All-Ireland winners a still effective strategy for improving participation levels.

It doesn’t actually matter whether Dublin or Mayo win on Sunday. A player from either team could walk into any classroom in the country on Monday morning and help prove that PE provides far more than a physical education.