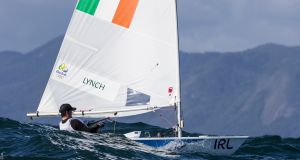 Ireland’s Finn Lynch in action during the Men’s Single-handed event off Copacabana during the Rio Olympic Games. Photograph: David Branigan/Oceansport

In the final major performance test of the year for Ireland’s Olympic hopefuls, Rio 2016 veteran Finn Lynch opened the Laser World Championships in Croatia with a 36th and more hopeful 12th placings in the 147-strong event.

After his debut games in Brazil, Lynch is moving into a new phase as a senior sailor though at aged 20, it will take another Olympic cycle before he moves into medal contention if previous medallists’ average age of late-twenties is a guide.

Of course, Ireland must still qualify for the Tokyo 2020 games before any hopeful can battle through a selection process and the Carlow single-hander may be mindful of Liam Glynn who is also in action in Split this week.

The Bangor sailor posted a 39th and a 21st for the opening day to lie 90th overall while Lynch is 69th at this early stage of the regatta.

The Laser worlds wraps up a summer of major regattas and although more training camps and regattas will pepper the winter months, the three-year countdown to Tokyo will mark a new chapter in preparation that will indicate the likely shape of Ireland’s sailing squad.

That has allowed Annalise Murphy to take a break in her preparation to compete in the Volvo Ocean Race with Dee Caffari’s Turn The Tide On Plastic team and still return in time to prepare for Tokyo.

“There are three obvious classes between the Laser, the Radial and the 49er [skiff],” said James O’Callaghan, ISA performance director. Within those three classes you have Ryan [Seaton] who is on his third Olympic [cycle] Finn who is on his second and Annalise, if she comes back on her third.

“We’re definitely in a new phase and over the next 18 months we’re hoping that the [other] developing athletes will begin to come through and come up to that level. Even in the Under-21 category in the Laser Radial, our sailors are in the top ten in the world.”

The gap in the mix compared to the Rio 2016 cycle is that there is no obvious successor to the 49erFX skiff pairing of Andrea Brewster – now retired from Olympic campaigning – and Saskia Tidey who has declared for Team GBR since the start of this year with notable results to date with Charlotte Dobson.

In addition to the two single-handed and skiff classes, there are potentially other classes that could be sailing for Ireland but due to resource limitations, these won’t receive official support until world class results are achieved.

Of the ten Olympic disciplines, the heavyweight men’s single-hander is also attractive to the Irish with two campaigns working privately in the Finn fleet. Ireland also has a track record in the 470 double-handed dinghy so there remains a possibility of team emerging here at some stage.

A switch to multiannual Government support plus developing new sources of revenue via the Irish Sailing Foundation’s work could see further improvements. The recent Sport Ireland review of the ISA programme noted:

“Given it has been 36 years since Ireland last won an Olympic medal, this is an extremely exciting achievement and provides evidence of the success of the longer-term strategy that ISA has been following for many years now.”