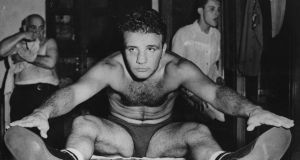 Jake LaMotta, the brutish former boxing champion whose life of violence in and out of the ring was portrayed in the movie Raging Bull died on Tuesday, according to one of his daughters.

LaMotta, who admitted intentionally losing a fight at the behest of mobsters, was in his 90s, listing his birthday as July 10, 1922, while other sources had the year as 1921. His daughter Christi LaMotta announced the death on her personal Facebook page but did not disclose the cause of death.

LaMotta’s seventh wife, Denise Baker, told ABC News that the boxer, who had been living in a nursing home in Miami, died of complications of pneumonia.

Actor Robert DeNiro, who won an Academy Award in 1981 for his movie portrayal of LaMotta, issued a statement saying, “Rest in Peace, Champ.”

LaMotta, who grew up in a rough neighborhood in New York City’s Bronx borough, had a fearless ring style in which he closed in on an opponent, leaning low and forward, and began battering away with little concern about the shots he might take in return. He had a reputation for having the strongest chin in the sport.

“Punches never bothered me that much,” he once told the Times of London.

LaMotta’s career was highlighted by a rivalry with the legendary Sugar Ray Robinson, who beat LaMotta in five of their six matches, including an especially ferocious title bout in 1951.

“I fought Sugar so many times, I’m surprised I’m not diabetic,” he said in a line that he would use often.

Fighting mostly as a middleweight and known as the “Raging Bull” and “Bronx Bull,” LaMotta finished his 13-year career with 83 victories (30 by knockout), 19 losses and four draws. He was never knocked out and in 2002, the authoritative Ring Magazine ranked him 52nd on its list of the 80 best fighters of the previous 80 years.

While LaMotta’s strength and volatility made him one of the top fighters of the 1940s and ’50s, by his own admission, his paranoid, jealous and self-destructive nature led to a life of turmoil.

LaMotta was a raging bull of a hoodlum as a child. After being beaten up at school once, LaMotta told Reuters his abusive father gave him an ice pick to use on his attackers.

“And when I went after them with an ice pick, they ran away,” he said. “Then I realised I didn’t have to use an ice pick any more. I was good enough with my fists.”

He fought other neighborhood boys in matches that adults bet on and ended up at a juvenile facility for attempting to rob a jewellry store. Due to an erroneous newspaper report, LaMotta went several years thinking he had beaten a bookie to death in a robbery.

As an adult, he was abusive to women and once severely beat his wife Vicki and his best friend after hearing they were having an affair.

Mobsters had a great deal of control over boxing during LaMotta’s career but he refused to take on a Mafia-connected manager. He did, however, agree to throw his 1947 match against Billy Fox in return for a long-sought chance to fight for a championship. In his autobiography LaMotta said he had trouble making the Fox fight look convincing.

The referee stopped the fight in the fourth round as Fox pounded LaMotta, who was not defending himself. By that point, LaMotta wrote, “If there was anybody in the Garden who didn’t know what was happening, he must have been dead drunk.”

LaMotta was suspended for several months after the bout and admitted throwing the fight when he testified to a Senate subcommittee investigating boxing corruption in 1960.

The mob did give LaMotta his shot at the title, though, and he made good on it, defeating French-Algerian Marcel Cerdan in 1949 to win the middleweight crown.

LaMotta held the title almost two years before losing it to Robinson in their sixth fight on Febuary 14th, 1951, a bout so fierce it became known as the St Valentine’s Day Massacre. LaMotta took a brutal pounding from Robinson but was never knocked down in a fight stopped by the referee in the 13th round.

LaMotta retired three years after that loss to Robinson.

Martin Scorsese’s 1980 Raging Bull movie was based on LaMotta’s 1970 autobiography and the boxer helped DeNiro prepare for the starring role by training and sparring with the actor.

“When I saw the film I was upset,” LaMotta told an interviewer. “I kind of look bad in it. Then I realised it was true. That’s the way it was. I was a no-good bastard . . . It’s not the way I am now but the way I was then.”

After retiring from the ring, LaMotta tried stand-up comedy and had a few small acting roles, most notably in the Paul Newman-Jackie Gleason movie The Hustler and the 1960s sitcom Car 54, Where Are You?

He opened a nightclub in Florida and in 1967 was sentenced to prison for six months on a charge of promoting prostitution.

LaMotta was in his 90s when he took the stage for a poorly reviewed cabaret-style show based on his life and co-starring seventh wife Baker, recalling highlights from his career and reciting Marlon Brando’s “I coulda been a contender” monologue from the movie “On the Waterfront.”

LaMotta had six children from his seven marriages. Robinson was the best man at the sixth wedding.