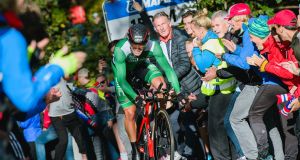 Nicolas Roche took his best finish yet at the Road World Championships, netting a fine 12th in the Elite men’s time trial in Bergen, Norway, on Wednesday. The race against the clock was won by Dutchman Tom Dumoulin, who was 58 seconds ahead of Primoz Roglic (Slovenia) and one minute 21 seconds in front of Chris Froome (Great Britain).

Roche was fifth fastest on the final climb, quicker than Froome, but time conceded earlier meant he finished one minute 53 seconds off gold. He was nevertheless satisfied with his showing.

“The climb is the bit that worked out best for me, compared to the real time-trial specialists. I didn’t lose as much time on the climb to them as I did on the flatter bits, so it suited me. That’s my best finish at the Worlds so far – I was 13th in 2013, so I’m happy with 12th today.”

Next up are the road races, starting with the under-23 men’s contest on Friday. Roche will be in action again in the Elite road race on Sunday.

“The road race is very open, and it is always a different race,” he said. “It’s good to have such a big team racing this year [there will be six Irish in the event]. It’s the first time that I remember having such a big number starting. I’m going into this year’s race with a different mindset. I’m going to take it kilometre by kilometre and see how it goes.”