From Brexit to Brolly, here is an alphabetical guide to the sports year that was 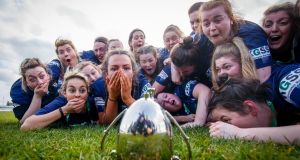 A – Asking for trouble

Comment underneath: “They will need to add Jesus and Mary as well to have any hope.”

Wales’s Gareth Bale: “I genuinely don’t know 99 per cent of Brexit. I don’t even know who the prime minister is anymore. I haven’t got a clue.”

Bale: “Well, there we go. I didn’t know that. I thought he was the mayor? I follow the golf, that’s about it.”

That’s the only way you can describe the 82 per cent of those who voted in Jamie Heaslip’s Twitter poll.

“They dismantled us physically and tactically, they ran over us for a shortcut, they went through us and around us – we were drowning from the start. We kept looking for a silver lining in the cloud as the game went on, but it just got darker and darker, we just got beaten up in every facet of the game . . . torn to shreds.”

Apart from that, Eddie O’Sullivan was happy enough with Ireland’s effort against New Zealand in the Rugby World Cup quarter-final.

“I was looking at both 15s and I wouldn’t swap anyone – I actually think New Zealand might take one or two of our players if they had the choice.”

“I hadn’t drank a brandy since 2009. Drank two yesterday. It’s nearly killing me.” So said Emily Scanlon the day after the day before, when she had attempted to calm her nerves while watching her grandson close in on winning the British Open. That’d be Shane Lowry.

Not every ground in the country can afford the technology, so sometimes you just have to improvise. Like one fella did with his binoculars and “Tá” sign during the Bord na Móna Walsh Cup final between Wexford and Galway in Enniscorthy back in January.

I – In the commentary box

“Nuno Espírito Santo . . . sounds like a hymn I had to learn for my Confirmation.” Brian Kerr, taken back to his youth on hearing mention of the Wolves manager’s name.

Not enough of them in the house when 11-year-old Ella Thompson, a member of Dunboyne Boxing Club, met her hero Katie Taylor on the Late Late Toy Show. And then the pair sparred – the padded palms of Katie may never recover. “What is legacy if girls like Ella don’t go on to exceed everything I’ve done,” wrote Katie on her Instagram account. Still snifflin’.

That would most certainly have been how Lukas Bates felt after the London Marathon when he attempted and failed to beat Richard Mietz’s record for the fastest marathon ever run by a person dressed as a landmark building. How long did it take the stewards to drag him under the frame at the finish line? A whole 30 seconds, his Big Ben outfit too tall to make it through. Gutted? Too right.

M – Mother of all mea culpas

July 2015, Golf Digest’s Shane Ryan: “Tiger Woods is totally, completely, unequivocally and utterly done . . . There will never be another moment, from now until the sun burns up the Earth, when Tiger Woods will be a good golfer again. Long after our planet is gone . . . it will still be true that Tiger Woods was never a good golfer after 2013. Tiger Woods has ceased to be capable of golfing excellence, and will forevermore be done. Tiger Woods has donned his last green jacket.”

April 2019, Golf Digest’s Shane Ryan, after Tiger won the Masters and donned another green jacket: “I wrote the wrongest possible Tiger Woods take, and the internet will never let me forget it. I was wrong about Tiger Woods. Wrong then, wrong now, wrong forevermore. Gigantically, calamitously wrong. Tiger Woods owns me, I’ve been humbled, and my humiliation will be plastered on the internet until that blessed day when I steal the internet keys from my editor and delete it from the face of the Earth.”

N – None the wiser

Upon spotting that they had accidentally broken the trophy they received for winning the Connacht Cup final against NUIG in March, the expressions on the faces of the Westport players were . . . sublime.

After Joe Brolly and RTÉ fell out, resulting in him being dropped from their panel for the All-Ireland football final replay, one Frank O’Driscoll of Clontarf, whose son Brian had a useful enough rugby career, penned a pithy letter to the paper:

Reporter: “Will you go to the White House if you win the World Cup?”

Donald Trump: “Megan should WIN first before she TALKS! Finish the job!”

Hibernian diehard Darren Thomson suffered a stroke and was unable to speak for four months, leaving his family worried that he’d never regain the power of speech. But on hearing the nurses tending to him chat about their love for Hearts, Hibs’ unloved Edinburgh rivals, he somewhat startled them by breaking his lengthy silence, hollering the immortal line:

“It felt so good to just hear my own voice again,” he later said.

Which was the state of this voter’s ballot paper in May’s local elections – and his or her summer when Mayo lost to Dublin in August’s All-Ireland semi-finals.

“Messi is a smallpox – but there is no vaccine.” So said Real Valladolid director David Espinar after the incurable Lionel helped himself to just the two goals and two assists against his team.

As in Róisín, Limerick’s finest. She failed to score in the regular shoot-out and she had a broken bone in her arm, but still she was the first to step up in sudden death for Ireland against Canada in their Olympic qualifier in Donnybrook. And she duly scored the goal that made this the first Irish women’s hockey team to qualify for the Olympics, after years of trying. Not a dry eye in the house when she embraced her first hockey coach Seán O’Callaghan after the game.

“Just send my best wishes to Warren and make sure he enjoys the third place playoff.” Eddie Jones sending his love to Welsh coach Warren Gatland after Gatland suggested that Jones’s England may have peaked in the World Cup semi-finals. As it proved, he wasn’t wrong.

As in Ruby. When he announced his retirement back in May, many a fine tribute was paid to him. Among the best was that of fellow jockey Patrick Mullins. “At his prime it was like watching George Best play, it’ll be very hard to replace him. There’ll be other champion jockeys, there’ll be other people winning Gold Cups, but there’ve been plenty of Bonds and there hasn’t been another Sean Connery. ”

(The hazards of talking to athletes immediately after they win medals):

Karsten Warholm (after he triumphed in the 400m at the European Athletics Indoor Championships): “Ah, it’s cruel to equal it. There was just a bee’s dick in it.”

Like New York Yankees infielder DJ LeMahieu. From his interview with the Yankees’ in-house magazine . . .

LeMahieu: “Last thing I read? Like on my phone?”

Interviewer: “Anything. A good article, a book, a fortune cookie.”

LeMahieu: “Probably something on my phone. I don’t know.”

Brian Kerr, tiring of pronouncements from our soccer governing body: “We’ve had more statements from the FAI than the Bank of Ireland would issue in a year.”