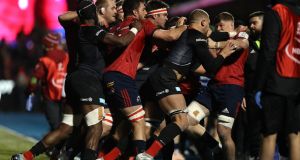 A mass brawl breaks out between the teams during the Heineken Champions Cup match between Saracens and Munster at Allianz Park in Barnet, England. Photograph: David Rogers/Getty Images

The fortunes of the four proud provinces could hardly be more contrasting.

Leinster’s progress to the knockout stages has already been serenely completed before Christmas after Saturday’s less-than-feverish romp over Northampton.

Ulster look well set to join them again in the last eight pending a pool shoot-out away to Clermont and Connacht are hanging in there after an astonishing, Munster-like, last-ditch victory over Gloucester. But, as for the famed escape artists themselves, the stark reality is that Munster must beat Racing in Paris next time out to stay alive.

This followed their bruising 15-6 loss to Saracens in the weekend’s heavyweight contest at Allianz Park on Saturday, the ramifications for which go far beyond any ill-feeling or actions taken as a result of alleged derogatory remarks made to the Saracens hooker Jamie George by Munster’s head of medical Dr Jamie Kearns.

Moving into the 50th minute of the game, prior to a Saracens lineout, it is understood that Dr Kearns took objection to George kicking the ball at Niall Scannell, and at some point in a lengthy, face to face exchange, told him to ‘F*** of, you fat p****.’

After pointing and talking at Dr Kearns and/or others on the sideline, an irate George turned to remonstrate again and the Saracens hooker was pushed back by Jack O’Donoghue.

When James Cronin did likewise, Mako Vunipola and Vincent Koch joined in, the latter pushing Cronin in the face before Nick Isiekwe charged at and grabbed O’Donoghue by the collar, which was the cue for the two locks from each side and gradually the rest of the two teams, to join in. Several of the prime instigators, with the exception of George, would have been oblivious to what Dr Kearns said.

Saracens’ captain, Owen Farrell, was actually the player penalised for steaming in from “10 metres” by referee Pascal Gauzère, which seemed rather selective, to say the least.

In any event, Dr Kearns subsequently apologised to both George and Mark McCall, although it is not clear whether this was before or after the Saracens director of rugby gave his post-match media briefing in which he said Saracens were considering whether to lodge a complaint.

“We need to decide to what we’re going to do before I start speaking about that. From what I know, something pretty bad was said at Jamie. He wouldn’t have reacted the way he reacted otherwise. We’ll take our time to decide whether we do anything.”

The tournament organisers, EPCR have confirmed they have launched an investigation, and to that end have written to both clubs for information, following which they will decide whether there will be any further action taken.

More pertinently, the mystifying decision to turn down the late penalty at goal which would have earned Munster a bonus point has left them even less elbow room. Munster need to beat Racing in Paris on Sunday, January 12th, and secure a bonus point win at home to the Ospreys a week later, to qualify for the last eight.

It is the win-or-bust scenario which Johann van Graan and his squad immediately came to terms with in the Allianz Park away dressing-room.

“We spoke about it inside as a group,” admitted van Graan.

“We said, ‘listen, we gave it all we got, one or two things went against us but we’re not a club that’s ever going to make an excuse’. We weren’t good enough on the evening and we lost to the champions in their own backyard, so in three weeks’ time we’ve got to go to Paris. For us to stay alive in Europe we need to beat Racing in their backyard and then round six will take care of itself.”

Racing’s futuristic, enclosed La Defense Arena, which like Saracens’ home ground also features a 4G pitch, has been described as many things, but back yard isn’t one of them. In win-or-bust mode, a victory is not beyond Munster. They had the chance to do so when losing in the pool stages two seasons ago.

Munster’s prospects weren’t helped by losing four of their World Cup contingent by the 54th minute. After Peter O’Mahony pulled out before kick-off with a groin injury sustained in the warm-up, Tadhg Beirne suffered what seemed like a fractured ankle or badly damaged ligaments, John Ryan sustained what Van Graan admitted was a pretty serious calf injury and Andrew Conway failed an HIA.

It also transpires that, like the other provinces, they can only play any of their 12-strong World Cup contingent in just one of the upcoming three interpro derbies, while also affording them two consecutive weeks off, even if this seems extreme in, say, the case off Jean Kleyn.

In all likelihood therefore, with an Irish squad to have a two-day get-together in a week’s time, the World Cup players will be missing for the next two games, which for Munster are away to Connacht and at home to Leinster.

Van Graan admitted they had a “massive challenge ahead”, adding: “We’ve got three interpros ahead of us and we’ve got to rest all 12 of the guys that went to the World Cup. And if you look at all the guys who are currently injured plus the injuries we picked up tonight, we’re going to be really, really skinny over the next three weeks.”

Meanwhile, Clermont’s all-too-predictable bonus-point win over an eliminated and weakened Bath kept the French team within one point of Ulster, and in all probability means the winner of the sides’ round five meeting at the Stade Marcel Michelin in four weeks’ time, on Saturday, January 11th will decide the winners of the pool and with that a home quarter-final.

Leinster’s games against Lyon and Benetton now offer them a chance to plot a home route all the way to the final, while Connacht will still be alive when hosting Toulouse on January 11th after the late double whammy by Shane Delahunt and Robin Copeland supplied the season’s most dramatic win to date at the Sportsground last Saturday.

They also host Munster there next Saturday, with Leinster at home to Ulster on Friday night.