Department of Sport to meet IRFU for Aviva Stadium talks

Minister for Transport, Tourism and Sport Shane Ross has confirmed that a delegation from the Football Association of Ireland asked the Government for a "bailout" of €18 million. Video: Oireachtas TV 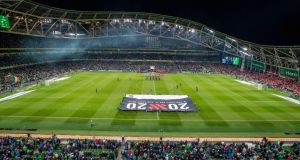 The FAI, which is in serious financial difficulty, is understood to be €1.2 million behind in its licence payments on the Aviva. Photograph: Morgan Treacy/Inpho

Officials from the Department of Sport are to meet the Irish Rugby Football Union (IRFU) on Thursday for talks on the future of the Aviva Stadium after the Football Association of Ireland (FAI) fell behind in its payments towards the operation of the ground.

The FAI, which is in serious financial difficulty and this week requested a financial support package of €18 million from the Government, is understood to be €1.2 million behind in its licence payments on the Aviva.

The licence payments are due from the two organisations to meet the ongoing costs of running the stadium, and are funded from match day revenue which flows to the respective soccer and rugby governing bodies following their games at the Aviva.

The IRFU confirmed on Wednesday that it would be meeting officials from the department “to discuss the ongoing operation of New Stadium DAC” – the joint venture between the IRFU and the FAI which owns and operates the 52,000 seat stadium.

The company is 42.5 per cent owned by the FAI, with the remainder owned by the IRFU. Under the ownership structure established when the stadium was built almost a decade ago, both the IRFU and the FAI have two directors apiece on the company’s board.

Minister for Sport Shane Ross said yesterday that the meeting had been requested by the IRFU. It is understood that the IRFU has no interest in acquiring the FAI’s share in the stadium.

However, rugby’s governing body is thought to be concerned about its responsibilities as a shareholder, and any potential liabilities it may have after the FAI made public the full extent of its financial difficulties earlier in the month.

While the subject of selling the FAI stake was repeatedly raised at yesterday’s meeting of the Oireachtas sport committee, it is believed there would not be any real market for the FAI’s share given the extremely limited scope of its operations and the fact that it does not generate significant profits.

The stadium cost €460 million to build with the government contributing €191 million. The Government retains a first charge over the stadium, meaning it cannot be sold without the permission of the minister for sport.

Mr Ross refused to say whether he would object to the sale of the FAI’s stake, but it is thought that the Government would be unlikely to stand in the FAI’s way if that was the route it opted to go down in an attempt to reduce its liabilities.

Aviva Stadium director Martin Murphy believes that any attempt to sell the association’s interest would be “complicated”.

“There would be charges over it and the bank would have a say,” he said. “It’s not something that you can really just put a ‘for sale’ sign on, and it would be very hard to put a value on.”

The department’s assistant secretary Ken Spratt told the committee that the stadium’s business model “only really works if it [the stadium] is owned by the governing bodies”.

1 ‘For 25 minutes I ran out of oxygen’: Pepe Reina on his coronavirus battle
2 Rory McIlroy admits Portrush nightmare was catalyst for his return to the top
3 Garry Ringrose to stay with Leinster as he signs two-year central contract
4 ‘This is sick’ - seventh-tier Swedish club cancels friendly after betting mayhem
5 World Rugby aiming to outline range of options by end of April
Real news has value SUBSCRIBE
Crossword Get access to over 6,000 interactive crosswords