JJ Hanrahan set to start for Munster; The curious case of David McGoldrick 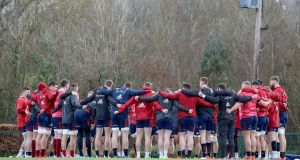 There are increasing signs JJ Hanrahan will be named in Munster’s starting XV for Sunday’s win-or-bust meeting with Racing in Paris. Gerry Thornley reports here that in the absence of Joey Carbery and Tyler Bleyendaal, it seems as if Hanrahan will start against Racing with Johann van Graan again opting for a 6-2 split on the bench, meaning inside centre Rory Scannell will again cover outhalf. Chris Farrell, CJ Stander and Jean Kleyn are also expected to be restored to the team when it is announced today. In his column this morning Matt Williams is responding to a recent encounter in a Sydney coffee shop that got him thinking about the Irish provinces’ keys to success: “Irish provincial rugby has enjoyed long-term success not because the athletes are born with more talent but because of the culture of never-ending hard work by both players and coaches. My two mates at the coffee shop are not part of that type of culture. They have the “I am entitled” culture.”

Niall Quinn will not be the FAI’s next chief executive, the former Republic of Ireland international has said, but he would be more than happy to play some part in the organisation’s recovery. Sheffield United take on West Ham in tonight’s sole Premier League clash, with Irish international David McGoldrick set to continue his extraordinary role - a striker who is a strong contender to be his club’s player of the season despite not scoring a single goal? He is to the Blades what Roberto Firmino is to Liverpool. Minus the goals.

1 Leaders’ debate: For one dramatic moment, the Taoiseach is like a rabbit in headlights
2 A vegetarian and a non-drinker visit Ireland: here’s their verdict
3 ‘I get paid to learn. I couldn’t recommend it enough’
4 Election 2020: Parties warned of ‘insane’ election promises as Varadkar offers Martin coalition
5 Miriam Lord: The left woos Mary Lou as FG tries to keep Ireland's nanas and granddads happy
6 Dolores O’Riordan’s former Howth home for €1.395m
7 New captain and new coach give Ireland a fresh Six Nations outlook
8 Ireland has EU’s most progressive tax system, study finds
9 Rory Best regrets attending Belfast rape trial
10 Dublin council promised to drop claims for €12m ‘in return’ for white-water rafting grant
11 Who are Ireland’s 17 billionaires?
12 ‘I don’t know if he died . . . but I don’t want him in the Tuam tanks’
13 Michael Noonan: Fianna Fáil was not an innocent bystander in the crash
14 Sonia O’Sullivan: Tracking the marathon Olympic journey of Aoife Cooke
15 New coronavirus is increasingly likely to spread to EU, health bodies warn
16 Newton Emerson: Ruling Sinn Féin out of power in Dublin infantilises Stormont
17 Fintan O’Toole: Historians will not believe sheer ignorance of Brexit supporters
18 Australia bushfires: Three killed as Canadian air tanker crashes
19 Man ordered to perform contract for sale of lands where he lives in Co Dublin
20 Election 2020: Varadkar tells debate he is open to coalition with Fianna Fáil
21 ‘In Ireland I’ve found another form of persecution’
22 Targeting a Dáil seat like a military campaign
23 Gardaí run foul of watchdog over penalty point cancellations
24 Eyewitness to Auschwitz: ‘We were held in the wagons like animals’
25 Gwyneth Paltrow’s adventures in the post-fact snake-oil business
26 Number of school leavers choosing apprenticeships doubles
27 Election 2020: 10 key questions to ask candidates on your doorstep
28 Apartment or house: which is the best buy?
29 52 places to go in 2020: Here’s where the New York Times says you should visit
30 Openly acknowledging my poor eating and fitness habits was empowering
31 New York Times’s spineless Democratic endorsement shows experts have lost their nerve
32 Are there annual limits on inheritances or gifts to a child?
33 Terry Jones was the John Lennon of comedy
34 Five things to look out for in political party social media campaigns
35 Michael Harding: ‘Rage began to boil inside me, but I didn’t let it surface’
36 What is the best exercise for you?
37 Great cities, great food: seven places for a gourmet getaway
38 Ireland’s favourite takeaway revealed
39 Eating out in Dublin – the homeless way
40 Fallon & Byrne gets permission for extension in Exchequer Street
Real news has value SUBSCRIBE