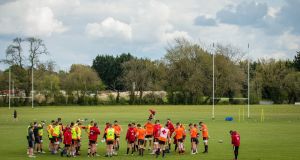 A Munster squad session. Over the last two decades, Irish provincial teams have had a number of world class players who have set exceptionally high standards. Photograph: Oisín Keniry/Inpho

On the very few days I am back in Sydney, one of my great joys is having a coffee at my local cafe.

The other day my little piece of “me time” was interrupted by two athletic young men with crooked noses and impressive moustaches. They sat at the adjacent table.

The trouble started when I overheard the statement: “I don’t like the coach and he doesn’t like me”. They were wearing their club’s famous uniform, which I won’t name to protect the guilty. I have to admit I was now openly eavesdropping. My body leaned and my ears strained to hear the good old bitching session that was under way at the next table.

The two cappuccino kids were displaying all the negative behaviour of young athletes who are not coping with the challenges of a high performance environment. They were playing the role of the victim. Not once in their conversation did they look inwardly and examine their own behaviour or training performances. They oozed personal entitlement.

There are two reasons why I got involved in the “bitchathon”. Firstly I am at that stage in my life were I simply don’t give a rat’s backside and secondly, I genuinely hate to see talented young people blow the opportunity of being a professional sportsman or sportswoman. The privileged life of professional sport is not offered to many people and there are many doors that can quickly take you out of it.

I will fast-forward through the opening exchanges after I said – “I could not help but overhear your conversation . . . ”.

You can imagine it was blunt on both sides.

I got some traction after I told them that if they kept eating cakes, like the beautiful custard-filled cannolis that were on their table and if they continued to put two spoons of sugar in their cappuccinos, added to their already poor attitude, I thought they had three of four months, maybe less, before they were punted out of the team. If that happens would they get another gig?

For every player that makes it as a professional athlete, there are hundreds who fail. Those that do make it have many qualities in common.

Firstly, there is the no dickhead rule. Dickheads don’t get selected. These two were in strife straight away. They were halfway out the door, under the sign that reads, “dickheads with selfish behaviour, who feel they are entitled to be selected, please exit here”.

Secondly, it is not the most talented athletes that make it to the top. Those that make it are athletes with talent, who work their backsides off. Winning the genetic lottery does not guarantee you success as a sportsperson. Successful athletes do more than their coach demands. We call it “extras”.

From Ollie Campbell driving around Ireland as a tie salesman, carrying a bag of rugby balls in the boot of his car, so he could stop at the local GAA ground and perform 50 kicks every day, to Colin Meads climbing New Zealand hills with pine tree logs on his shoulders, even when they were amateurs, the greats have always done more than is expected.

Top-quality athletes use the 15-90 law. Fifteen minutes of extra work every day, gives you 90 hours of extra quality practice a year.

High-quality players are also coachable. They want feedback from their coach because they are driven to improve their performance. They might not like the feedback but they take it. They understand that continual learning and constantly improving their knowledge is an integral part of being an elite sportsperson.They set very high standards for themselves and they hold their team-mates to those same high standards.

High-quality players are also brutally honest. What needs to be said will be said to your face, not behind your back.

I don’t hold out much hope for the two cake-munching, cappuccino-sipping, moustache-twirling moaners

They are also “energisers”. They bring energy to meetings, practice sessions, and competition by their words and deeds. They arrive early and they are prepared. They are also unimaginably competitive. They are obsessed with victory. Whatever the price is for winning, they will pay it.

I told my two unhappy coffee companions about the long-term success of the Irish provincial teams and how it was no accident. Twenty years of hard work, honest feedback, dedication in highly competitive environments have created cultures where elite performance can thrive.

Over the last two decades, Irish provincial teams have had a number of world class players who have set exceptionally high standards. These standards have driven their fellow players, with less talent, to succeed in team performances far above the level of the individuals’ talent.

Irish provincial rugby has enjoyed long-term success not because the athletes are born with more talent but because of the culture of never-ending hard work by both players and coaches.

My two mates at the coffee shop are not part of that type of culture. They have the “I am entitled” culture. It is both toxic and common.

If you bring that culture to professional sport, or business, you will have an intimate rendezvous with failure.

I don’t hold out much hope for the two cake-munching, cappuccino-sipping, moustache-twirling moaners.

If their sporting lives had been linked to Irish provincial rugby’s culture, then their futures may have been very different.