Hanrahan set for inclusion while Farrell, Stander and Kleyn are all fit for Paris test 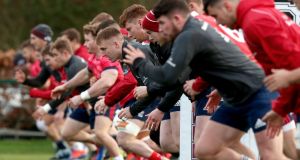 The Munster squad training ahead of their European Champions Cup showdown in Paris against Racing. Photograph: Bryan Keane/Inpho

There are increasing signs JJ Hanrahan will be named in Munster’s starting XV for Sunday’s win-or-bust meeting with Racing in Paris (kick-off 4.15pm local time/3.15pm Irish).

Hanrahan’s hamstring twinge forced him off in the 57th minute of the defeat by Leinster a fortnight ago and ruled him out of the ignominious beating by Ulster in Belfast last weekend, but in the absence of Joey Carbery and Tyler Bleyendaal, it seems as if Hanrahan will start against Racing.

In the further expectation that Johann van Graan will again opt for a 6-2 split on the bench, inside centre Rory Scannell will again cover outhalf.

Another of the main causes for optimism in Munster ranks is that, among others, Chris Farrell is back. Akin to CJ Stander, Farrell was one of those missing from the loss at home to Edinburgh and those aforementioned derbies.

Locked and fully loaded, with Farrell, Stander and Jean Kleyn – all of whom will be restored to the team when it is announced today – Munster have lost just one of six, away to Saracens. Even against the back-to-back champions, Munster withstood the loss of Peter O’Mahony in the warm-up, Tadhg Beirne after 10 minutes, John Ryan inside half an hour and Andrew Conway by the 53rd minute, to remain very competitive and ought really to have secured a bonus point.

Kleyn was part of an excellent first hour by the Munster pack, while Stander and Farrell are, along with David Kilcoyne, among the province’s primary ball carriers.

Farrell’s strength in contact and handling skills have been used as the launching pad for many of their starter plays, notably off quick line-out ball when Keith Earls comes off his wing to take Conor Murray’s pass and hit Farrell on the gain line, from which point the centre can truck it up, pass back inside or pull the ball back for the wraparound.

Admittedly, few teams will be as well versed in Farrell’s strengths as Racing given their backs coach is Mike Prendergast, who had the same role when Farrell played for Grenoble for three seasons from 2014 to 2017.

Farrell hooked up with Bernard Jackman and Prendergast after the Clogher Valley and Campbell College product had three injury plagued and unproductive years at Ulster.

Asked this week if they saved his career, Farrell quipped: “Whether I had much of a career to save at the time I don’t know.”

However, he readily admitted: “They had a massive effect on my career. Just me going to France in the first place, that was the opportunity that Birch gave me. There is no doubt that I owe them a lot of gratitude for the opportunity that they gave me. And they backed me when I was there as well even though there were times where I might have had a bad game. Yeah, I have an awful lot to owe them.

“There was an opportunity to go to England but I said: ‘No, look it, France is just a complete change and might suit me a bit better.’ It helped going somewhere that was so, so different.”

Prendergast, a former Munster scrumhalf, is in his seventh season working in the Top 14, with Grenoble, Oyonnax, Stade Francais and, since the start of this season, Racing.

“What he brought to us in Grenoble was a sense of structure. He had a real focus on first-phase attack for us. He was persistent about trying to score off first phase and he was really good for us in that area. He is a quality coach and he brings a human aspect to it. He sits down and he will talk to players individually about what they can improve on. He has had a good impact there I think, as of yet, and he is just a great coach.”

Farrell was self-critical about Munster’s attack last season but although they are the joint eighth highest try scorers in the Pro14 and the joint lowest in the Heineken Champions Cup, he maintains their attack has “improved massively this season” and are less reliant on their kicking game.

He attributes this to the control and clarity coming from their outhalves and the improved skill set of their forwards, and says that once the team becomes more settled they will see dramatic improvements at the business end of the season.

However, that business end of the season will not include the European knock-out stages if they don’t translate these improvements into the hard currency of tries on the 4G pitch at the indoor La Defense Arena.

At least conditions should suit.

“Yeah, well, suit for who? Both teams hopefully. We have been there before and it is an amazing place to play and you have got to relish that. The conditions are perfect for individuals who have talent and power and speed. We are going to have to nullify a lot of their threats because they are so, so dangerous over there.

“Looking at the Clermont game at the weekend,” said Farrell in reference to Racing’s 27-19 win, “they just have an ability to punish you if you give them half a metre. We’ve seen that at Thomond Park when Teddy Thomas and Finn Russell were causing us a lot of trouble but on this surface more so than ever.”

Yep, Farrell will have some defending to do as well.