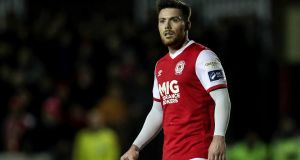 Brandon Miele has been banned for two years after a case brought by Sport Ireland. Photo: Laszlo Geczo/Inpho

League of Ireland player Brandon Miele has been suspended for two years following a violation of Irish Anti-Doping rules. Sport Ireland announced on Tuesday that the 26-year-old Dubliner committed a violation of Article 2.3 of the rules after failing to submit a sample when required to do so while playing for St Patrick’s Athletic last season.

The rule states that a violation has occurred if a player fails to provide a sample “without compelling justification, refusing or failing to submit to sample collection after notification as authorised under these Rules or other anti-doping rules”.

Miele was randomly selected to provide a sample on April 19th, 2019 following a game against Sligo Rovers. The former PFAI Young Player of the year had been an unused substitute in the game.

Sport Ireland had also alleged that Miele had committed an alleged anti-doping rule violation under Article 2.5 which covers tampering or attempted tampering with any part of doping control. However, a disciplinary panel found that Sport Ireland did not establish to their comfortable satisfaction that Miele had committed a rule violation under Article 2.5.

In a lengthy statement of his own, issued through the PFAI, Miele said that he struggled to provide a full sample and then left without doing so out of concern for his four-year-old daughter after being informed by his partner that she had fallen.

“I had reached such a state of agitation and confusion as a result of my daughter’s health at this point that I felt I must leave to be with her. I was not aware at the time of the consequences of leaving at this juncture but felt my first obligation was to my family,” said the statement.

The headline period of ineligibility is four years for such a violation unless the athlete can establish it was not intentional. The panel recognised that Miele and his partner were caring and responsible parents who regarded the health of their daughter as paramount. Miele also fully cooperated. Consequently the suspension was reduced from four years to two years.

On 19 April 2019, while an unused substitute for St Patrick’s Athletic, in a match against Sligo Rovers, I was selected randomly to do a post-match drugs test.

As I had already urinated twice over the course of the match, I found it difficult to provide a sample. While trying to do so, I was informed by my partner, Sinead, that my daughter had fallen and hit her head.

Over a period of two hours while attempting to comply with the requirements of the testers, my partner became increasingly concerned about the health of my daughter and contacted me continuously to ask me to return to care for her.

While some confusion arose as to whether or not she had been brought to hospital, it became apparent to me that it would be necessary to leave the testing centre to be with my daughter, who has a history of health problems in her short life to date, including one period of intensive care detention.

After two hours of trying everything to provide a sample including drinking copious amounts and walking on cold floors in bare feet, I was only able to provide a partial sample.

I had reached such a state of agitation and confusion as a result of my daughter’s health at this point that I felt I must leave to be with her. I was not aware at the time of the consequences of leaving at this juncture but felt my first obligation was to my family.

I am pleased that, in spite of the decision, the tribunal fully accepted my honest attempts to cooperate and indeed found that “all four witnesses called on behalf of Sport Ireland were of the view that Mr Miele acted in a sincere and fully cooperative manner at all times and took the decision that he had to be there for his family” and “genuinely believed that Mr Miele was agitated and upset and concerned about the health of his daughter.

The panel reached the conclusion that Sinead and I are ‘caring and responsible parents who regard as paramount the health and well being of their young daughter….the failure to provide a sample (after a two hour period) was driven by Mr Miele’s desire to be with his family and daughter and does not in the opinion of the panel constitute a manifest disregard of the potential anti-doping violation’.

While I do not regret my decision to prioritise my daughter’s health, I do regret that the effect this has had.

Ultimately, I have to take responsibility for my actions that night but I do feel that I was placed in an impossible position. I believe that many people would have followed a similar course.

I was not sufficiently aware of the rules or penalties that follow a failure to provide a full sample. I do believe that the sanction of two years is very severe having regard to the dilemma I faced and having regard to lesser bans for people who have been found guilty of taking a banned substance but I must accept the decision of the tribunal.

I realise that I have the option to appeal but given the possibility of an even longer ban and my desire to put this episode behind me, I do not intend to do so.

For the avoidance of any doubt, I did not at that time take, and have never taken, any banned substances.

Although I feel that the punishment that I am facing is particularly harsh, I hope that this will serve as a lesson to all other footballers and sportspeople who are faced with giving a sample.

I hope they never face the choice I had but my experience is such that I would advise everyone now facing such a situation that not giving a sample should be the very last resort and every conceivable effort should be made.

I would like to thank my family for their support and for the assistance of the PFA Ireland who have provided professional and legal advice throughout the process with particular thanks to Stephen McGuinness, Stuart Gilhooly and Patrick Marron B.L.